Rita grew up in a theatrical boarding house helping her mum, and joined the Land Army doing farm work during the war and afterwards. When she married she and her husband went into the pub trade.

I was fourteen when I left school in 1941. I worked for my mum, helping in her theatrical boarding house, and worked part time in a fish and chip shop. It was good, you used to get a bit of fish!

Helping my mum at the boarding house was an interesting job. We used to get all kinds of theatrical people – quite well-known people in their younger days. Roy Castle was one favourite and Hilda Baker. Then my mum let me go in the Land Army. That was in 1945.

A friend, a little bit older than I was, instigated me into joining the Land Army. She lived across the road to me and she talked about how much she loved it in the Land Army so that was one reason l wanted to go. l used to plead with my mum, ‘Oh Mum, Marion is loving it in the Land Army, please can l?’ In the end l managed it.

l got in the Land Army and I first went to Allington near Grantham which was a training place for a few weeks. Then l went to North Kyme which is not far from Sleaford. l stayed there for about ten months and did various jobs, mostly general farm work. l moved on to Wellingore, not too far from Lincoln, and l settled down there.

I had never done farm work before and it was hard work, but we were all girls together! We lived in hostels, about thirty of us in each hostel – it was an experience. I made some very good friends and kept in touch with some for several years but there wasn’t anyone that lived near me. 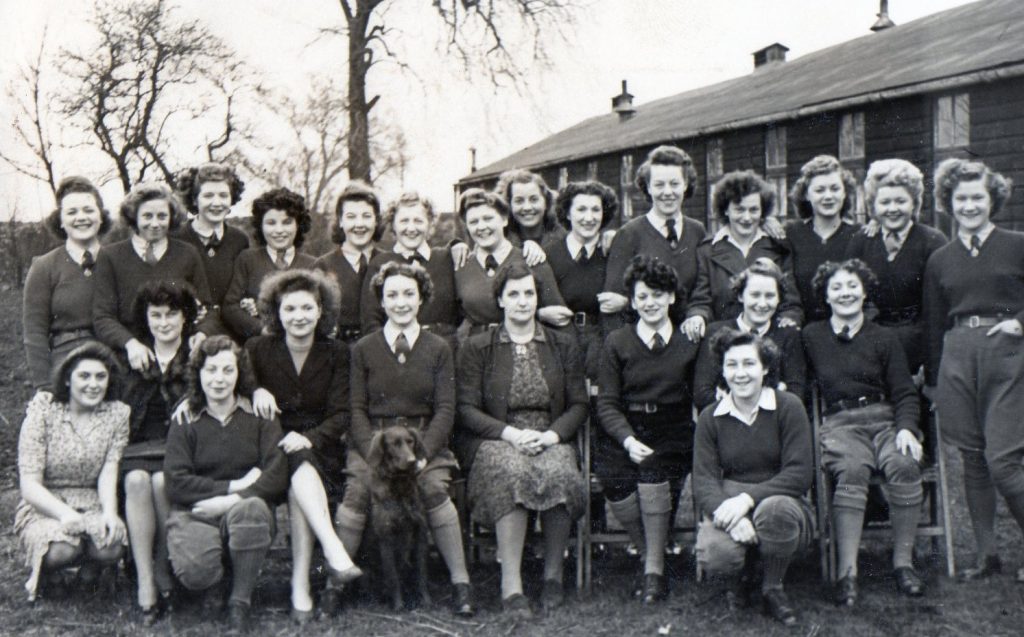 Outside the hostel in uniform

The life of a Land Girl

At the farm we were up at 6am and at work at 7am. We had a uniform but that was only for best. We used to work in overalls and jumpers, wellies some days another time boots depending on what you were doing. If you were working a long way off, they took us in a lorry or a van. If it wasn’t too far away, we use to ride our bikes. Sometimes there was only two or three of us and sometimes there were about 12!

We used to finish about four o’clock in the afternoon, depending on what the job you were doing. In the summertime we worked really long hours. We used to come back and have tea and then go back out to work again. Sometimes it was about 9 o’clock at night when we finished.

When they cut the barley or the wheat, we had to ring the big stooks – we had to get those together and tie them, and then we had to stand them up. When the field was all finished that was left for a day or two after which we would have to go and turn it round again. That was so it would dry out not go through the machinery damp, otherwise it would get mildew And they were heavy!

It was the same with the potatoes. As we were potato picking, we would put them in a basket. Then we would take it to the horse and cart, put the potatoes into a sack and lift them onto the cart. There used to be two of us for that job, to lift the sack with a stick one at each end. That was hard work, but we loved it. 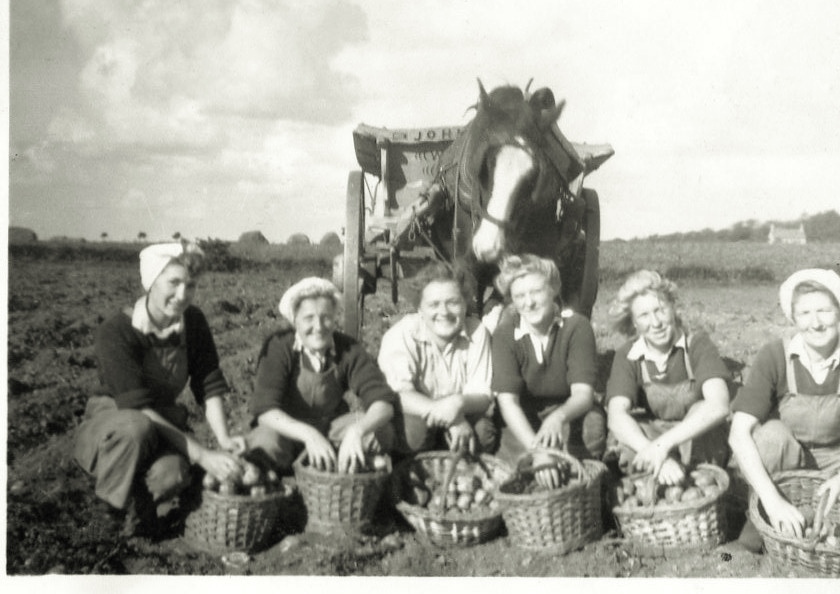 You just had to get on with it. We worked in frosts to pull the old carrots out of the ground or sugar beet. They had a hand machine to run down the rows of the sugar beet to ease them up out of the ground. We followed that and picked up one in each hand and banged them together to get the soil off, before putting in a heap. When you’d done that you got your scythe and cut the tops off and that went into another pile. Carrots were pulled later so they weren’t as bad as the sugar beet which were pulled when the ground was frosted. That was really hard work.

For a while l could not work because l got a wrist injury. I was off work for a while and could have claimed compensation for it had l wanted, but we didn’t really know anything about compensation in those days so I just said, ‘No, I’m going back to work’. 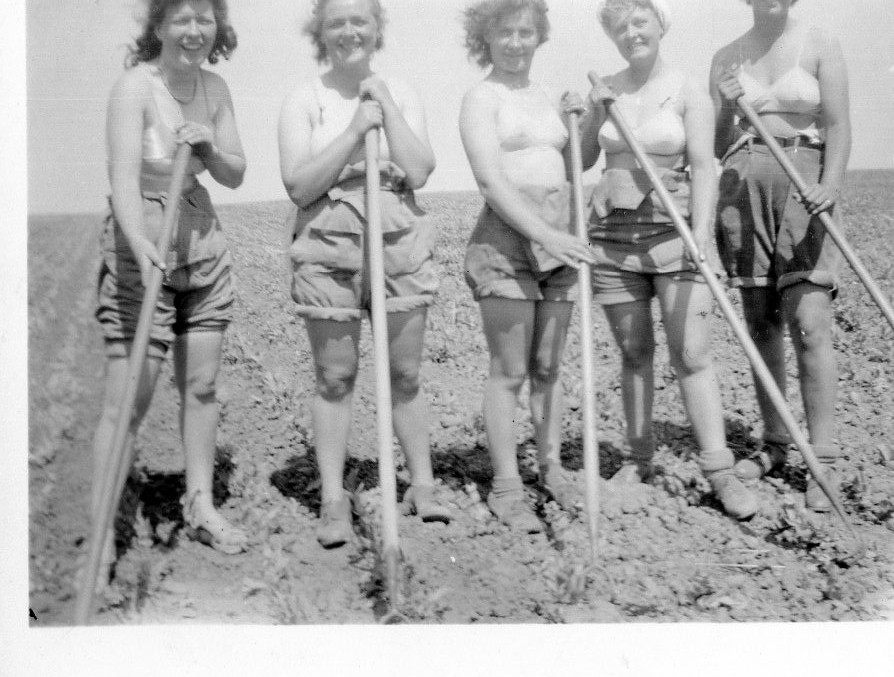 You didn’t have a choice of what job you did, you just got sort of ferried out – ‘You, you and you are going to do so and so’. Some of them had regular jobs at the same place. Some used to work in the dairy farm. That was something l never did, milking and that sort of thing.

Making friends during the war

There was an aerodrome bordering the village that l was staying in and my first night there was an air raid. You could hear the bullets going by and that frightened us to death! It was such a scary night we wondered what we were coming out for, what were we doing there. We had quite a few raids where we lived but that was one of the scariest moments.

Because there was RAF Waddington and RAF Cranwell, there were quite a few of the aerodromes around there and you got to know some of the lads on the aerodrome. You used to meet up in the pubs, perhaps go to the cinema. We used to go into Lincoln pretty regularly and you got to know a few people. When you sort of missed someone you knew that something had happened…

In a roundabout way it would be heard on the grapevine when an aircraft had not quite got home, which happen quite a bit. Even though the war had almost finished when l joined there were people still flying out there. It was sad for some of them some who got back and died from their wounds.

Being a Land Girl was a highlight of my life. You lived in different places and you got to know different people. Once on the station at Castleford with my mum I met someone who went to the same school as me, but I didn’t know anyone apart from her. A lot of people came from all the way from Maltby and Doncaster. Then we started getting lots of people from London and it did not seem the same after that, you know, because you are going too far afield, whereas from Yorkshire you sort of clan together a bit more.

Once l was in the station at Castleford and my mum had come to the station with me and blow me if – she wasn’t a friend of mine, but we went to the same school – I met her on the station. That was something different like. People that lived more or less Doncaster. l did not know anybody apart from her. A lot came from Maltby and Doncaster, all that way. But then we started getting lots of people from London it did not seem the same after that you know,’ cause you are going too far afield, whereas from Yorkshire you sort of clan together a bit more.

Marriage and the pub trade

The war was nearly over when l went into the Land Army but there was still a lot of work to be done then. The people had not come back to do their jobs on the farms yet, so l was there for another three and half years. Gradually they did come back but we carried on with our jobs.

l was on a poultry farm for about eighteen months and that was really good – l loved that job. They had about a thousand poultry on there and their own incubator. l used to help the little chicks out their shells. That was a fascinating job.

I met my husband in Lincoln when l was Wellingore and about two years later l came out of the Land Army to get married. I married and had three children. After that we went into the pub trade. Went to Newmarket first, as trainee managers and then to Ingoldmells at Skegness as managers. We went on to Holbeach in Lincolnshire and we had a pub there for about fifteen years. We stayed there until 1977 when we retired. There were some interesting people because it was quite a busy pub in the country, on the main road.

Recognition for the Land Army – a message from the Queen Mother

l couldn’t go to the unveiling of the Monument to the Women of World War II. l had a personal invitation and everything, and my daughter was going with me. My daughter and son-in-law were going to London a couple of days before and we were joining them the next day to go to the unveiling of the memorial and to see a show. Then, we heard on the radio about the London bombings and I thought, ‘What’s going on?’  We managed to ring her on the train and she said ‘l don’t know what’s happening, mum, there’s something going on the train, by the sound of it we are being diverted back to Cambridge.’ She rang back a bit later and said ‘l am sorry mum, we can’t get in to London, they have stopped the trains and won’t let us in.’

It was still wonderful, and I’ve got my badge. I had been to a big Land Army reunion at the Albert Hall in 1969 and that was fantastic. There were land girls from all over the country there! l went with the girls from North Kyme who we’d invited over to our place for dinner. I recognized a few faces. It was just absolutely electric! We were all there that had done the same thing together as girls. Quite a few of them stayed on longer than I did. And quite a few of them married farmers. Some of them did all right!