Jean combined her skills as a school teacher and sailing instructor, at Filby and Hunter’s Yard, for some years in the 1960’s

I learnt to sail with the Sea Rangers in Norwich and at Whitlingham, at Norwich Amateur Rowing Club, in dinghies, mainly, various types of dinghies. In 1964 I was at Keswick Hall training to be a teacher, and through a friend of mine there, I heard that Norfolk County Council were running sailing courses and there was one at Easter for prospective instructors for the local schools. I went along and qualified. Oddly enough someone signing himself L.G. countersigned the certificate and I didn’t know who he was. I was into sailing with the college, then I got my first job at Thorpe St. Andrew secondary modern school, and we were taking pupils sailing at Filby in the dinghies. The pupils were secondary school age, 12 to 16. When we hired the whole Hunter’s Fleet, which was usually done the week of the Royal Norfolk Show, because the schools close for part of that week, we had the whole fleet and we usually had four members of staff and sixth formers as skippers.

A teacher at the grammar school, Margaret Cannell, did a lot of sailing at Filby with dinghies and so on, and we skippered the boats with the sixth formers who were better qualified. There were 14 fourteen sailing cruisers in the Hunter’s Fleet, four-berth, three-berth and the two-berth cruisers, and we took youngsters from what was the second year in those days. I think that’s Year 8 these days. So roughly twelve year olds. I would skipper one of the four-berths usually, with three little boys. I really enjoyed that, especially when sailing in the one that was used in the BBC filming of Coot Club, or Swallow and Amazons as they called it, which was named Teasel for the season. I was sailing with my three little boys and someone shouted to me ‘Are you Mrs Barrable?’ which was rather nice. 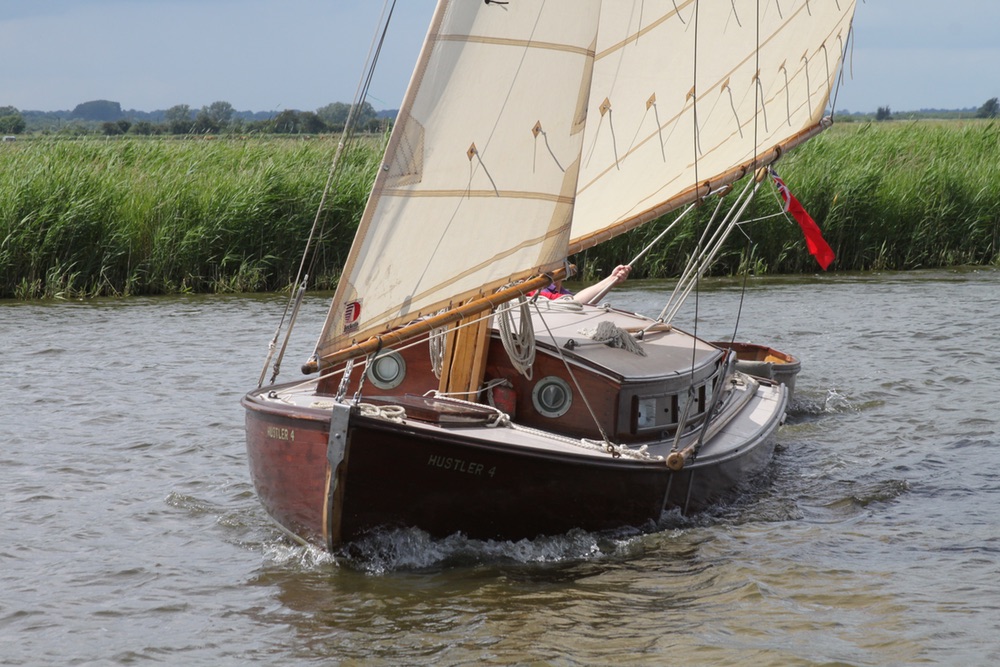 I was an instructor for ten years or so. I dropped out of it when we went comprehensive because I’m became a Year Tutor and I was so busy. We had rainy weeks some times and strong winds. I can remember we lost a cruiser once. We were all going from Potter Heigham. You don’t always see the whole fleet while you’re sailing, you just hope that they’re all going to end up in the right place. One boat didn’t turn up for lunch at Hickling. I was sent back with my crew, sailing, looking for them, got all the way to Potter Heigham bridge and still couldn’t find them. No-one on the bank could see anything going on. So we sailed on. From lunch at Hickling we were due to go to Horsey for the night. When we got to Horsey the word was filtered back to me, I was at the back by this time, that the boys had gone straight there! They thought ‘oh, we can’t be bothered to go to Hickling first, we’ll just go straight there’, so they had a bit of a roasting. It was very worrying. I couldn’t think where they could have gone. Why they should have gone back through Potter bridge, which they didn’t of course. They didn’t realise how worrying it was, but they were alright.

We did a First Aid course as part of the sailing instructors’ course. I think one of the worst times was when a boy put his finger in the tabernacle when the mast came down, and I had to go and thumb a lift with him, to get back to my car to take him to his mother in Brundall, I think it was, so she could take him to the hospital. I think in those days the parent had to do that.

We had a boat in Greece for a time, in the Ionian. One day Les could hear Norfolk voices on a boat moored near us so he went off and had a chat, came back and said that there was an engineer working, from Norfolk, and a younger man, doing the woodwork on the boat, who came from Great Plumstead, I think it was. I thought, well that was our catchment area. Les went back and had another chat and then I went out to see him and we looked at each other, he was about 25 or 26 at this time, and I said, ‘did you ever go on the Broads cruise?’ and he said ‘yes’. I said ‘well which boat were you in?’ and he said ‘I was in the boat called Teasel that year’, and I said, ‘well I was your skipper, you know’, and we looked at each other again, because obviously we’d both changed and he’d changed quite a lot. We went out to a taverna that night with him and his fiancée, who was also working in Greece. It was rather nice. Sailing being the connection.