Michael learned computer and people skills on the job. He was one of a team introducing computerised systems to Colman’s, but was made redundant when successful implementation of the project meant that his team’s skills were no longer needed.

I left school at 15 knowing I wanted to work in an office. I applied for a job at Eastern Counties Farmers. Only boys went into the office in those days and did the clerical work; girls went in as typists. Whilst there, the manager asked me to prepare some statistics – not statistics as we know now – so I used to add up all the invoices and calculate whether we were actually making a profit or not. I got quite good at it.

One day I read the Eastern Daily Press and saw an advert for Colman’s in their sales-statistics office. I’d come to quite like statistics so I applied and got the job.

I went to Colman’s in 1970, when I was 25, to the office in Kings Street. There was a team of us pulling out the computer printouts which we used to process the different figures and put them in categories. We used to prepare lots of sales figures and estimate the sales over the next few months in conjunction with the marketing estimates. These figures were prepared in a form which became known as spreadsheets and were rather complicated. The spreadsheets were then used for estimates for the various periods in the future, and the projected sales figures were used to plan production.

Every month we received the sales of various products from all departments. I think we were split into three teams to work on Colman’s – the mustard and sauces, Robinsons soft drink and Farrow canned goods as well as various other products. I worked on catering sizes – the larger packs of everything. When we had our figures, the three teams would meet.

I was quite good at working on these quite simple statistics and, if I’m honest, this was one of the happiest times of my life – because I was good at it. If you were good at something you got promoted so then I became a supervisor. I applied and was accepted by the Organisation and Methods department and worked on various systems there. Colman’s then wanted to merge us with the Business and Computer department and call us ‘business analysts’. They also wanted to bring computers and computing to Norwich; it was done at Hull previously [at Reckitt’s].

The computing was brought down gradually to Norwich, beginning with the mini-computers which were a lot smaller than the big mainframe and early machines which took up nearly a floor. These were the size of a big twin-tub washing machine. They would do a lot of work but were not as powerful as a modern smartphone.

I worked with a team on manufacturing systems and, despite not having computing training, I was taught to write simple computer programmes and was able to process the systems to work efficiently. For example, overnight I would run certain jobs which produced the information which was used for other systems and for planning.  It was like running the computer to plan statistics for production.

This worked well until all the computing systems were installed. Then they didn’t need the department to be the size it was, as once we had set up the mini-computers, the job was literally redundant and smaller teams were able to monitor what was being done across the departments. It did seem a bit hard at the time. In a way you thought you had been used but I did learn an awful lot about computers. This was the 1980s and there was a lot of downsizing – not just at Colman’s – and a number of us were made redundant.

I applied to County Hall for a job and found my experience of computing systems at Colman’s was much more advanced than anything local government had at the time. One of my main responsibilities was being the main contact for people operating computers and experiencing problems. With my training at Colman’s I found I could relate to people and reassure them. 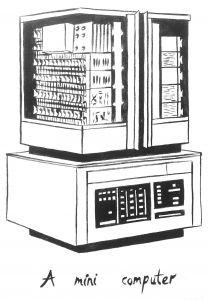 Michael Rymer talking to WISEArchive on 9th November 2015 in Norwich.