Valerie’s great grandmother Emmeline worked as a starch packer at Colman’s when she was aged 16. Her eldest daughter Beatrix  at 18 years old was working as a mustard packer at Colman’s. Valerie started work at 15 as well.

I discovered that my great grandmother, Emmeline Clara Reynolds, worked for Colman’s as a starch packer when she was aged 16. She was born in 1864/65. Her eldest daughter Beatrix Maud Reynolds appears in the1901 census which states that she was aged 18 and worked as a mustard packer at Colman’s. It must have been hard work for them being so young but I worked at 15 as well. 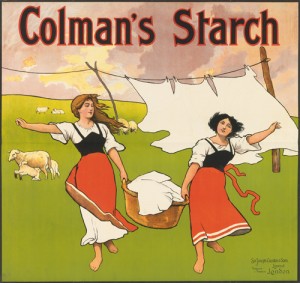 In 1881 Emmeline was still living with her grandparents. She was aged 17 and lived in Albemarle Street. Well I know there’s an Albemarle Road off Newmarket Road but this was obviously in the St. Stephen’s area and must have been bombed in the war.

Emmeline married quite young to John William Reynolds and had three daughters – one was my grandmother Beatrix. John died young and she then married an Alfred Burton and had three sons by him: Sidney, Albert and Cecil Burton. She became a laundress after she re-married and worked from her own home in 74 Suffolk Street in Norwich. She worked from home for a long time but I suppose it was the easiest thing to do with six children. She died in 31 Alexandra Road in Norwich aged 77. She left quite a lot of money for 1943 – £1163.3s.11d – to an Annie Wyatt who was a spinster. It was quite a lot of money considering you could buy a house for about £300 then.

One of Emmeline’s sisters, Gertrude Kate, was a boot trimmer at age 15. I have a picture of her with her son who seems to be about 30 or 40 years of age. She was probably over 60.

Valerie Broom talking to WISEArchive on 4th March 2015 in Norwich.