Ken chose to work as a chemical engineer in the food industry and became a Head of Process Research before being approached to run the Colman Research & Development department in 1974.

When I left school at age 16, the Youth Employment Office found me a position with HJ Heinz at Harlesden as a junior assistant in their packaging research department. I really enjoyed working there and I continued working there until 1956 when I joined the RAF. I knew I had to do my two years National Service and thought I may as well get it over as soon as possible, so I joined up when I was eighteen. I did my ‘square bashing’, at Bridgnorth and trade training at Middle Wallop and was then shipped out to Germany. I ended up in a remote little village in Westphalia on a brand new radar station. The station was controlling the bottom two air corridors into Berlin. We were stuck in the corner of the British zone, close to the East German border and the American zone. My two years there were interesting and very character building!

In 1963, Heinz built new offices, laboratories and a pilot plant at Hayes Park in Middlesex. The pilot plant was a well-equipped, ‘state of the art’ facility. It was an interesting period for the food industry. Everything was becoming highly mechanised with Heinz crop development centred on beans and tomatoes. One of the first jobs I worked on at Heinz was the electronic sorting of beans. Some amazing machines had been invented through which a stream of beans was run and every individual bean inspected. Any discoloured or marked beans were ejected from the line by an air jet. It was very sophisticated for its time. Vegetable preparation also changed dramatically over the years. When I started at Heinz, there were rows and rows of women hand peeling and trimming vegetables in very wet conditions.

After thirteen years at Heinz I felt it was time to move on. I was very happy in the food industry. As somebody told me very early on ‘people will always need to eat’. I was appointed by Rank Hovis McDougall (RHM) and eventually became their Head of Process Research. RHM was very much a milling and baking business, not inclined to invest in research. But Lord Rank (of film fame) was a great supporter of research and effectively financed the centre himself, something of a personal ambition. The facilities were absolutely superb and the pilot plant was equipped to cover most of the food processing operations including the very new process of freeze drying.

My last two years at RHM were spent co-ordinating the development work carried out on their manufacturing sites and in 1974 I joined Reckitt & Colman. I had no intention of moving to Norfolk, having only camped there for a week as a young scout but I was approached by Colman’s who wanted me to run their research department. It was a wet Saturday with the football team playing at home when we first came to Norwich with two children, aged seven and nine who very quickly became fed up with driving around. We were lost, obviously at the wrong part of the city and if it hadn’t been for an appointment in the evening, we might have packed up and said ‘forget it!’ but we didn’t. We met the Colman’s people that evening and on the Sunday we toured the sights and that was it – we were there to stay.

The Research & Development at Colman’s was housed in the buildings of the old Carrow School and spread out in small laboratories across the factory site. Plans for a new building were drawn up in 1962 and erected in the grounds of Carrow Abbey in 1963. It was a superb pilot plant and laboratory facility with an experimental kitchen, a tasting department and all the microbiological and analytical equipment needed. An extension to the pilot plant was added in 1969 to cope with the high levels of work. At that time it was called The Reckitt & Colman Research Department. It was a global centre researching new products and processes for any of the company’s food businesses across the world. We had many visitors from overseas and we did lots of travelling and meetings, talking to technical professionals.

Apart from keeping up with current trends, we also engaged in new product and packaging development. Much advancement were happening at that time such as moving from glass to plastic bottles, Tetra Pak and other flexible packaging, aluminium ring pull cans and many more. We also entered the era of computers, process control, continuous production and cleaning in place. Unlike the old days when cleaning was done at the end of the shifts by hosing down, the whole cleaning cycle was built into the plant.

Colman’s did a lot of vertical integration in their time. They had their own printing works for labelling and packaging, they made their own bottles and had various buildings, each with specialist equipment to make their unique range of products sold under the Colman’s and Robinsons’ labels. The reasons for some acquisitions were difficult to understand for example Reeves and Winsor & Newton, producers of artists’ materials. Others like Caxton’s wine and beer kits and Coleman’s wine company did have obvious synergy with Colman’s food and drink.

In 1992 the Reckitt & Colman Research Department was re-organised. The emphasis shifted and we were set up as a technical centre. The Carrow site was being re-developed and buildings were demolished to make room for a very large soft drinks plant. In this plant bottles were taken straight from the bottle making area onto the filling lines where they met the product. The drinks were produced continuously. Raw materials, stored in bulk, were transferred to mixing vessels, made into drinks and pumped into the fillers. The filled bottles were conveyed through labelling machines and automatically placed into trays and shrink-wrapped. The shrink-wrapped product was then automatically palletised and transferred to the warehouse. Along with this there was continuous quality control, measuring fill level, inspecting labels and ejecting non-standard product. There was no stopping the line – the key was continuous production. This was achieved by working closely with equipment suppliers to design and develop machinery and equipment to replace the manual element. 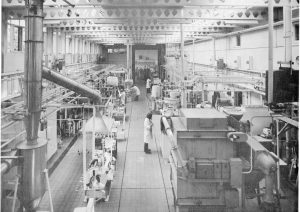 On 1st May 1995 Unilever bought Colman’s food business from Reckitt & Colman for £147million. On the same day the soft drinks business was sold to Britannia Soft Drinks for £103million. Three years later I became a Unilever pensioner.

Over the 44 years of my working life, the food industry has undergone considerable change; however, there are products such as Colman’s powdered mustard, which have survived for over 200 years with very little change to the way they are produced. When I walk round a supermarket today, I wonder whether any of the products I have helped to develop will still be on the shelves in 200 years time.