This summer Sue Lewis and Howard Wheelton saw the opportunity, between Covid lockdowns, to explore the Broads in their 23ft wooden gaff cutter “My Quest” and to take her back to her birthplace of Horning. 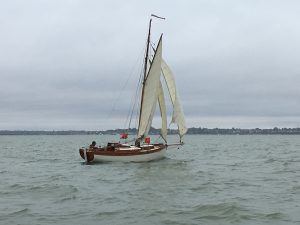 Having sailed up the coast from Harwich (39 nautical miles, 8 hours) they took the mast down in Lowestoft and arranged it along the cabin top ready for passing under low bridges. Whilst many Broads yachts perform this operation regularly, even raising and lowering the rig between bridges on occasions, Sue and Howard had decided that for their own enjoyment and peace of mind the mast would stay down and this would be a cruise under motor. They entered the Broads via Oulton Broad, followed the River Waveney to Beccles, and the River Yare all the way to Norwich with a brief detour into the River Chet. That was a delightful cruise in its own right but the north was calling! To get there they had to cross beautiful Breydon Water at exactly the right state of the tide (the advice is: “cross near low water, stay in buoyed channel”) to avoid the strong tides and dangerous currents at Great Yarmouth and have plenty of clearance under the bridges there on entering the River Bure. 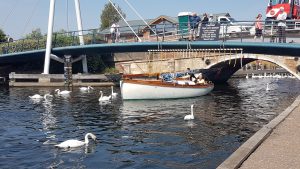 My Quest at Wroxham Bridge 2020 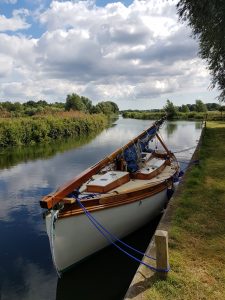 My Quest at Loddon Norfolk 2020 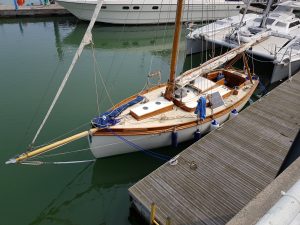 “My Quest” was built in 1930. Claud Worth, famous for his books about cruising in his boats called “Tern”, commissioned the sister hull called “Swift” as a half-decker in 1929, had her built in Kent, and sang her praises in Yachting World (Aug 1929). Perhaps inspired by this article a second hull was built the following year, this time by Ernest Woods in Horning in Norfolk, to the same design but with cabin and cockpit as Worth suggested. Initially named “Melody”, then later “Quest” before finally “My” was added. 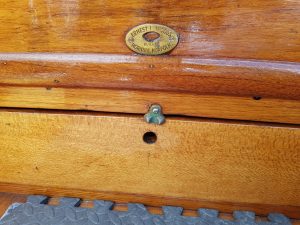 Online research had lead Sue and Howard to WISEArchive and an account by Ernest Woods’ grandson Rex Woods of his childhood in Norfolk, including time spent in his grandfather’s boatyard. Rex knew where they should look for the old yard and “the first dyke on the right entering Horning from the south” was easy enough to find. It’s still called Woods Dyke and on the site is a large new house appropriately named “Woods End”. One large shed remains and is still in use for working on boats. The current owner reckons it’s the old shed with the original roof but otherwise extensively altered. Sue and Howard will be checking with Rex but they think they found where “My Quest” was born.

During the cruise they saw some lovely examples of the “white boats” (Yare and Bure One Designs) designed by their boatbuilder Ernest Woods – both sailing and laid up in yards – but no further clues about “My Quest”.  The next step, and perhaps WISEArchivers can help, will be to research H.J. Suffling from Gt Yarmouth who was the first owner of the boat. Perhaps there are still some old photos of Suffling family sailing holidays on the Broads where Sue and Howard might spot their boat? Or the next owner William H Taylor who had her in the 1940s and 50s? They would welcome any information…. 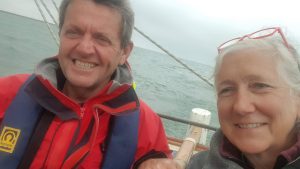 View all posts by WISEArchive →
Jarrolds Alterations Department
How to ‘Turn’ a Wherry Mast: A Trainee’s Tale (1971-2020)