Richard was a bricklayer in Norfolk from the age of 15. He worked on various sites in and around Mundesley before moving to work for the National Trust at Blickling Hall.

I was fifteen when I left school in the early sixties and started my first job as a bricklayer in Mundesley. I did a five year bricklaying apprenticeship with Mr Fennel who was the manager of S.A. Randell builders and funeral directors. I didn’t go to college but learnt everything as an apprentice for Kenny Reynolds while working alongside labourers, plumbers, painters, and carpenters.

I biked from Knapton to Mundesley five days a week to start work at 8am and finished at 4.30pm. On site there was a wooden hut with a tortoise stove in which we kept our tools and had our meals. There was a tin shed for cement and a small tin toilet with no pan so it was placed over a hole in the ground. My job was to point a concrete block wall that ran the whole length of the property. I was also sent to the yard or shop to collect any items, which had run out. Once a week I would get fish and chips for us all, which cost 1s.4½d. In the summer I bought ice creams and sometimes on a Friday I had to get the men’s pay packets and timesheets. My first wage was £2.16s and I had to provide all my own tools.

My first job was at Beckmeadow Way – Beckmeadow Way and Beckmeadow Drive were the main development sites in Mundesley. People bought a plot, the architect drew up the plans, and we dug all the foundations and trenches for the drains by hand, which normally took about a week. The sewer pipes were two foot clay pipes and the manhole and inspection covers were built of brick with a cast-iron cover. The rain soak ways were dug six foot deep by four-foot diameter, three-quarters filled with rubble and then covered with concrete. The bungalows themselves were built mainly in Fletton brick and breeze blocks with cement tiles, and the internal walls were built of breeze blocks or cement and sawdust made in Brandon, Suffolk, before being finished with a fine coat of gypsum plaster. The homes were normally two bedrooms with a lounge, a kitchen, a bathroom and gas central heating or solid fuel. The floors were made up of four inches of hard-core and four inches of concrete, unless wooden floors were specified. And the windows, doors and frames were all wooden and single glazed. The roofs were made on site.

Another site we built was on the old station at Mundesley and Hillside and Links Road chalet site. The chalets had a flat roof and were built of brick and block with a stramit board made of pressed straw, bitumen and stone. We also built the estate at Brooklands on the Trunch Road in Mundesley, but had to clear a lot of mature apple trees before we could start setting out the foundations for the bungalows. We built two houses in the high street near Gold Park and a cobblestone wall in front of the properties; all the stones were handpicked from the stone pits at Sheringham. It took around four hours to pick about two tonnes because they had to be a certain shape and size. A mixture of sand, lime and cement was used and they could only build so high in a day because the weight would push them out of line. 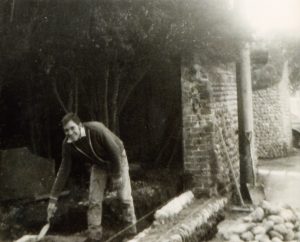 We also built some houses outside Mundesley, at various places including Walcott, Hickling, Happisburgh, Gimingham, Knapton, and Bawburgh. We built a house for a fire officer in North Walsham, and renovated Hellesdon Mill, which was a wooden building standing right beside the river. The scaffolding stood on sleepers in the river which were held in place by someone holding the scaffold pole; no easy task in the flowing water. We also did maintenance work on schools and hotels in Mundesley and Cromer and installed cash point machines for banks in Norwich and North Walsham. One big job was on the Hotel Continental; we had to re-tile parts of the roof, take down chimney stacks and put in bathrooms in some of the bedrooms. This was done in the winter when the hotel was closed.

I finished working in Mundesley in 1988 at the age of 42, and got a job with the National Trust at Blickling Hall as a bricklayer. The Blickling Estate consists of Blickling Hall and village, Oulton, Itteringham and Ingworth, with farms and cottages. My job was renovating cottages, farm buildings and walls around the estate, as well as repairing the dam wall in the lake. My salary was £8,868 per annum, working 40 hours per week between 8am and 4.30pm, and I had 21 days holiday per year, which increased to 25 days after ten years service. Clothing was provided, such as overalls, jacket, trousers, boots, shoes, waterproofs, water boots, and safety equipment; like hard hats and safety goggles. I worked from the estate yard with one other bricklayer, two carpenters and one painter. The estate yard had a carpenter shop and a paint store, and at the back of the yard we stored old bricks, tiles and sand. There is no estate yard now; the last person retired in 2011; but they still pay me a pension.

We had one outing a year in the minibus and also had Christmas parties at the hall. At Christmas we were given a Christmas pudding but now we have a choice of pudding or £10; I choose the £10. I used to get a turkey from the farm at Christmas time from one of the tenant farmers, which I had to pay for but not as much as you would pay in the shops.

I also worked at Felbrigg Hall, Sheringham Park, Horsey Mill, Burnham Overy Windmill, Oxborough Hall, and Blakeney. The bricks we had to use were nearly all second hand to match the existing brickwork. Any new bricks we used were handmade at Bulmer – these were a more uniform size and much easier to get on with than the old materials. We had to use lime mortar on the old brick walls around Blicking estate. It was sort of lime putty, or slag lime, and was very dangerous to use because it was ‘hot’ and if you got a piece on your hands or on your eyes it would burn. Today they use cement and sand, which doesn’t breathe and that’s why you get cracks in the walls of the new buildings; the cement is hard and the material is soft and the bricks just crack, especially around the windows and above the concrete lintels. The materials have changed a lot since I started working: PVC has replaced wooden frames; plasterboard has replaced the lime mortar mix of horsehair and reed. 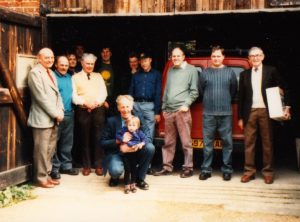 End of an era

I had to leave work in 1999 due to ill health and moved back to Mundesley. I think my ill health is a result of working out in all weathers and the amount of heavy lifting we had to do. It was very hard labour digging the foundations and trenches by fork and spade. I can remember in the bad winter of 1962-63 we couldn’t even get a fork in the ground. We actually got laid off for about five or six weeks because everything was frozen and it was just impossible to work. Fortunately that was about the only time I got laid off through bad weather; usually they found work for us inside if possible. However, being out in all weathers, especially wintertime and bricklaying, it’s taken its toll I’m afraid. The cement was in hundredweight bags, nowadays it is half-hundredweight bags, and about 10,000 bricks would be delivered on lorries and all were unloaded by hand. When we plastered the ceilings, your arms were above your head and you’re looking up all the time and I think that very much contributed to the spondylitis I’ve got in my neck. And when you work on foundations for a building, you’re standing with one foot in the foundation, the other foot on the edge of the soil so you’re on the tilt all the time and that takes a toil on your back and your arms. I think that has a lot to do with why I’ve got arthritis.