Despite the long hours and cold nights, Brian enjoyed working in Colman’s transport and traffic department for over 25 years.

My first job after finishing school in 1959 was at a shoe factory down Mousehold Lane. I worked as a clicker, cutting out the pieces that make the top of the shoe with a knife or machine. I made shoes for men and women, and also the Start Rite shoes for children, which are still around now. I was only 15 at the time, and didn’t find the work too difficult, but it was dangerous. There was no health and safety in those days, and it was very easy to cut your fingers. I saw a half a finger laying on a board there once, when someone had cut right through it! We didn’t wear any protective equipment, so we’d spend a lot of time at the hospital. The doctors and nurses knew us well, the shoe factory workers, coming in to get stitches in our fingers. I worked there for maybe five to eight years, until Italian shoes took over the market in the middle of the 60s and knocked us out of business. After that I went to Mann Egerton’s where I worked on preparing new cars. The cars came down from the factory covered in protective wax, which we would remove with hot water and paraffin. It was a good job. I also worked at Mackintosh’s chocolate factory on night shifts, and my dad worked there too. This was only over about three years, before I went to Colman’s. That was in 1968, when I was 24.

I worked in the “transport” or “traffic” department at Colman’s (the name changed many times) where I was loading lorries, using the forklift, and so on. I did all sorts. There were railway lines running all the way through Colman’s, and in the early mornings I would get the coal off the railway. We’d take three trucks over to the power station every morning, taking coal that would get shovelled into the power station for the evening. We would also go down to Trowse to unload ships which came up the River Yare. We would roll the barrels up ramps onto long Queen Mary trailers, which a tractor would pull back to the soft drink part of the factory. The barrels contained the juice concentrate, orange and lemon and what have you, which Colman’s used to make the soft drinks.

It was a fantastic department, although the trouble was that in winter – when you were sat outside on a forklift – it was very cold! It was especially cold when I worked at Snetterton for three years. The old snow would blow in your face when you were loading the lorries, and when sitting there on the forklifts it felt deadly. I remember once when the snow was up to my knees: I’d walked all the way to Colman’s from Lincoln Road, which took an hour, only for the governor to say ‘You’d better go home, because we ain’t doing nothing today!’ So I’d walked all that way, when others were ringing in sick, only to be told that Colman’s was shut! On the bright side I still got paid because I’d clocked in. They might have docked your pay if you came in late, but I was never late when I was working in Norwich. It was only at Snetterton that I might be late because the roads were nothing like they are now, not like the current A11. There used to be a lot of accidents along that road – in fact, it’s a wonder nobody who worked for Colman’s at Snetterton got killed. There were usually three of us and we would take turns driving. I drove on every third week, so the cost of petrol was shared in that way. We would be driving home at 2.00am, or sometimes 6.00am when we worked nights. That would be a twelve hour shift, from 6.00pm to 6.00am – they were terrible!

I did some other jobs at Colman’s over the years. I went to the flour mill, and also took the mustard seed in a big trailer to the mustard mill. Colman’s grew the mustard themselves and processed it in the mill, and the mint too. In the summer there was mint, the work-stead stunk of mint! It was a lovely smell though; mint that’s fresh and just been picked. Sometimes I was sent to other the parts of the factory when they were a bit slack, such as in the wintertime. We didn’t load a lot of lorries in winter because less juice was produced, unlike the summer where plenty of soft drink was made. So in winter they lent workers out to departments that were short staffed. I once spent a couple of weeks in the tin shop. It was terrible in there, far too noisy, and it made you deaf because there was nothing to protect your ears! Luckily we weren’t there long, just while someone was off sick. Sometimes I even worked as a chauffeur in the summer when the regular chauffeurs were on holiday. I’d drive to the airport in my chauffeur’s hat, in a big modern car, and hold up a name sign for the person I was there to pick up. I would take directors from the airport to meetings back at Colman’s, that sort of thing. That was a good little number! A nice break from factory work.

Towards the end of my time at Colman’s I worked on the order picker machine as we called it, which was a kind of forklift that could raise you up high. There were racks of items from floor to ceiling and using the machine I would pick out twelve of this or twelve of that, making up a pallet of orders that was sent out on the lorries. That’s where I finished, although I was mainly in Snetterton for those last years. When Unilever bought up the works they didn’t want us. It was in August 1995 that I finished – we all knew something was up. The director told me, ‘Redundancies are coming up; take the severance pay and run’. So I did, and that’s how it ended. It was a lovely job, a job for life. 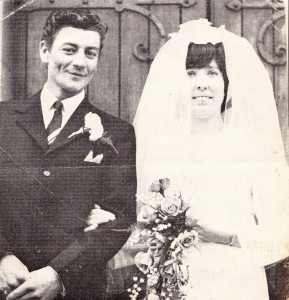 I met my wife Christine at Colman’s. She worked in the printing department, where I would pick up the labels with the van to take to the works in Peterborough and Cambridge. That’s how I met her, and it was in 1971 that Christine and I got married. A lot of people met future partners there. Colman’s was like a family where everyone knew everyone, and we’d do all sorts of social activities. We would go the social club on the cricket grounds where professional dancers would give you lessons. I played darts, football, and cricket – there were teams for all the departments and lots of tournaments went on. We never got to live in a Colman house, although we would have loved to, but have lived in our current house for a long time, for 44 years! I used to organise a Christmas dinner down Prince of Wales Road. Thirty of us would go. But it’s all nightclubs now; I haven’t gone down Prince of Wales for yonks.

In the peak of summer we had some fun in the river. We would strip off at dinner or in break times, jump in the water and have a swim about. There were hundreds of us! There used to be more people in the water than there were on the banks looking at them! I didn’t go in myself because I couldn’t swim. It got banned in the end because Colman’s reckoned it was too dangerous. Pleasure boats would be going up and down the river, the cruisers and what have you. And that’s another thing: the women on the cruisers would be sunbathing on top with nothing on! They’d go past Colman’s with their whistles and everything, and we all on the bank there! It was a popular place, plenty of water. It was lovely.

I belonged to the GMB union at that time, and there was plenty of union action. We went on strike once or twice, but they kept us behind closed doors to load lorries in the night. We shouldn’t have been doing that, shouldn’t having been loading them while industrial action was being held. There was never any comeback on it though. Mostly the unions took action over wages, although we were getting a good whack of pay anyway. If the union got involved you couldn’t go against it – they would throw you out, call you a blackleg. In the end they usually achieved what they wanted. It worked in those days, better than it does now. I still meet lots of people from Colman’s. There’s a man who lives just down the road, he’s retired now, but he used to say ‘You wouldn’t like Colman’s now’, that it’s different from when we were there. It’s a different world now, with everyone in it for themselves. But back then we were a family, we were carefree, and we helped one another. I loved everything about working there. 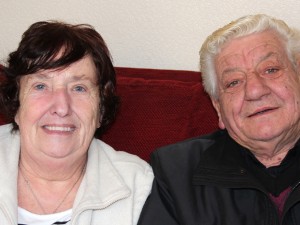