Academic and researcher Jenn always been a crafter and has returned to her first love in recent years, taking commissions and selling at fairs.

I’ve always been a maker and a crafter and I chose to do that when I left school in 1984. Dressmaking was my first love at that time so I did textiles and fashion design. I went to New College in Swindon and then to North Star College of Further Education. While I was at college a lady came and gave us a spinning lesson and although we had only about ten minutes on the wheel, I always remembered it.

When I left having got a couple of A-levels, a City & Guilds qualification, I knew that I wanted to design and make clothes but there wasn’t really a great deal of support in those days. It was easier just to go and get a proper job – working 9 to 5 in a shop or an office, that sort of job.

My first job was in a very small company that made sportswear. I was making pattern cuttings for leotards, things like that. It was a very low wages and long hours and eventually I decided that it was a route to nowhere so I left.

Meanwhile, at home I was always making my own clothes, always knitting, always making things. My nan taught me to knit but I was so young I can’t even remember learning. I was a total oddity in the fact that I used to make my own clothes; my friends were not so interested and even my mum had stopped knitting by that point.

After a time working in shops, and later in administration – sort of nowhere jobs – I came to the conclusion that I needed to do something because I was going nowhere fast. By then I was married, with a mortgage, and thinking about having a family. This was at the end of the ‘80s, beginning of the ‘90s, so it was during the recession and my husband was in the building trade so his wasn’t exactly a reliable income.

I decided that I wanted to go into science; I was going to become a schoolteacher. I needed a degree to do that so I did a degree in Natural Sciences, part-time, with the Open University. I had two children during that time and I worked part-time, again in shops, in supermarkets. Then I tried teaching in a secondary school … awful! I was awful at it and it didn’t make me happy – it was not for me.

At that point I wondered what to do next and I thought, I know – Master’s degree. And that’s how we came to be in Norfolk: I went to UEA to do a Master’s in Climate Change. (This was in 2000 when climate change was becoming a really serious issue.) For ten years after that I worked as a researcher, and as an academic really. I ended up starting my PhD but then we decided to move to New Zealand.

My parents had retired there to join my sister, and my mother had recently been diagnosed with a serious illness so that was a big motivator in our decision. And I felt that I needed a change as my heart wasn’t in the academic side of life, so we thought we’d give it a go. 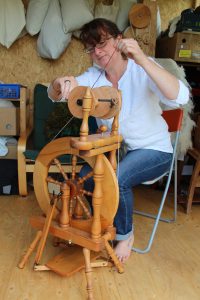 One of the things I wanted to do when we moved to New Zealand was to have another go at spinning. One day I was at the Christchurch country show where there were all these ladies with their spinning wheels. I had a go and that was it, I was completely hooked. I can’t explain, it, I can’t tell you why, it was almost like I’d been on the wrong path from 18 through to nearly 40.

After that I bought a spinning wheel from up the road for $30. It’s an Ashford – my big old girl. And I was lucky where we lived, in Ashburton which is the home of the Ashford Spinning Company which manufactures spinning wheels. A lovely lady in their shop gave me a couple of lessons and from that point on I was just hooked.

I started with mill-spun materials that you just buy in, ready-dyed and ready-to-go. We only stayed in New Zealand for a year (it was a mistake, it was the wrong place to be, my home is in Norfolk) and when we got back I went on learning, on my own. Most of my learning was done from videos on YouTube. That way and by joining forums on the internet and talking to people online and just doing it, having a go.

My first skeins of yarn were terrible! There were lots of mistakes – well, not mistakes, a lot of learning. I’ve still got the very first thing I ever made. I bought some really beautiful roving, which is like a long woollen sausage that you spin from, and I made myself a really small shawl with a sort of neck thing and a fancy button.

When we came back from New Zealand in 2010, I went back to the university to finish my PhD, which is in sustainable construction. I completed it within 18 months and we were trying to re-establish our life and renting a house so there wasn’t really much time, or space, for spinning. 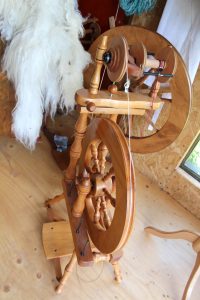 I didn’t start really seriously spinning until about three years ago when I went almost full-time. My academic career was kind of fizzling out and we had found our house here, which we renovated, and while we were renovating the wool thing was growing.

I was starting to work with raw fleece, which I buy from the farm down the road. It’s straight off the animal and fresh and stinky. It’s a glorious smell – it’s absolutely fabulous. I’m told people are repulsed by it but I think it’s wonderful. 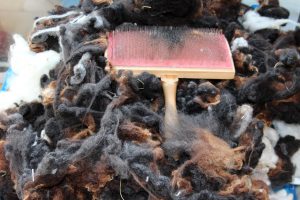 I take on commissions to spin for other people and I sell to knitters, textile artists, weavers, felters. Weaving doesn’t really appeal to me but I have started felting. Basically this is doing everything to wool that you really shouldn’t be doing and involves lots of soap, water and friction (lots of rubbing).

I like playing with textures and different materials and colours in my work. I use what’s called acid dye, I don’t use natural dyes. When I say acid dye, the acid is actually the fixer, either white vinegar or citric acid, both of which are non-toxic. The dyes themselves are toxic but it’s cleaner and less toxic I feel for me to be using than some natural dyes. 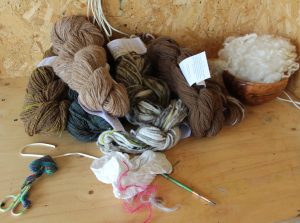 As far as the future is concerned, I want to keep growing and to turn it into a livelihood. I’ve spent the past two summers taking my stuff out to craft fairs and getting feedback. It’s a confidence thing with me, it’s always never good enough; when someone buys something that you’ve made you want them to have the best thing that you can possibly make. I’ve got so much stuff and the next step is taking it and selling it online to a larger audience to see how that goes.

Jenn Monahan  talking to WISEArchive on 8th July 2016 in Elsing.