‘I like to do things for people that they enjoy. And I’ve been doing it for years, even when I lived in Thorpe.’

Mr Page is motivated by the principle of, ‘If you give, you receive; because the Lord said that, and I have worked on that basis ever since.’ This principle has guided his life’s work and set an example for his three daughters.

Time in the army

Mr Page joined the army at 17 and was sent to Benghazi where he met many others. Upon realising he couldn’t swim, they threw him into a river! He remembers the head man being a Lord and Lord Lucan was suggested, though he does not recall very well.

He spent time in North Africa, and had to travel across ‘a wide area with no houses or anything on it’ for three days to reach his destination with the squad. They did so by vehicle, though there were times were they had to march. Mr Page does not remember the heat being a problem.

He spent a couple of years in North Africa with ‘some of it in Palestine. I remember coming back to this country and being demobilised’.

Mr Page joined Norwich Union at their headquarters in Surrey Street, Norwich, in 1945 and met his wife, Nancy Franklin there. She worked in the main office and they married in 1951 and may have lived at a flat before their first house in Aylsham Crescent.

Being a leisure manager at Norwich Union

Norwich Union bought the sports ground at Pinebanks when it became available and Mr Page began to run it. He recalls that there was a house which needed work to make it usable for their purposes. Initially there were chains around the place with some tables inside. They had a bar put in and then added a hall. The facility enabled them to hold darts, dinners, dances, bonfires, fireworks displays (where he had to light the fireworks and run away), Christmas parties for children (though Mr Page did not dress up as Father Christmas), and functions. During the winter months they hosted indoor activities due to the weather. Mr Page thoroughly enjoyed his time working there for Norwich Union with his team of staff.

He recalls one function where there was a band playing in the main hall: ‘I had this band and they got noisy, you see. I said to the owner, ‘Turn that down. If you don’t, I’ll stop it.’ And they carried on, so I pulled the plug out. And they couldn’t go on until I put the plug back in.’

The sports ground would also host large functions. On one occasion, Mr Page organised for an aircraft to fly over and he recalls it flying in low.

Mr Page also organised annual garden parties at the sports ground. They were open to the public and as there was no method to control entry, they could become very busy. For one garden party he vaguely recalls somebody important coming down from Great Yarmouth, possibly Morecambe and Wise.

The closure of the Norwich Union sports ground at Pinebanks 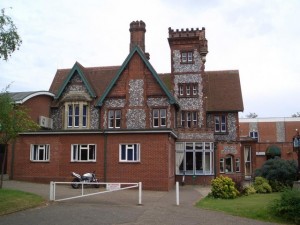 The club at Pinebanks grew bigger and bigger, however, the opening of clubs near the rail station began to have a profound impact. Mr Page notes that travelling to Pinebanks was inconvenient for people, and the lack of clubs at night time was also a factor. Consequently, fewer people went to Pinebanks and it closed due to decreasing membership. Mr Page retired when Pinebanks closed having been there for the whole duration of its time under Norwich Union.

Mr Page ran a rambling club and led the walks and when he retired he continued to organise walks twice a week. The walks would be for several miles: ‘I mean we were all younger then and kept going’. These were popular events and were typically based in Norfolk but occasionally they went to Derbyshire. Mr Page organised local holidays for people as well. It all fitted with his principle of giving to people, something he has practised throughout his life.