Gordon trained as mechanic with the REME, with whom he served in Germany. After working briefly for Mann Egerton’s in Norwich he trained as a horologist at the Government Training Centre in Letchworth. He ran his own watchmaking shop on Elm Hill, Norwich, for 30 years before retiring on 31st December 1999.

I went to the local infants school. It was a council school. In 1945 I took the 11-plus and went to Paston Grammar School. My parents couldn’t afford the uniforms and all that sort of thing, so I left before I took my exams to get to university.

I finished school in 1950 and started work at Hannant’s Garage in North Walsham. My mother got me the job there. She cleaned the offices at Hannant’s. My first day was January 1st 1951. I was what we used to call a ‘grease monkey’. I served petrol, oiled and greased cars and so on. I wanted to be a motor mechanic. I was there for 18 months. I picked up quite a lot of mechanical stuff. I learnt to drive on the premises there, although I wasn’t of age.

National service was in at that time. I didn’t want to go into the infantry and kill people, I wanted to mend cars and things. I got into the Royal Electrical and Mechanical Engineers, or REME, and that was that. I got called up – well, I volunteered – and ended up in basic training. I was seventeen and a half.

Basic training was at Blandford in Dorset. Then I moved on to Devon where they did extensive training. I was in an officer training unit for some time. However, as I knew my parents couldn’t afford the mess fees, I decided not to continue with that. I was posted up to Ellesmere in Shropshire on a vehicle mechanic course. After about six months I ended that as a VM3: vehicle mechanic third class.

With the REME in Germany; keeping the Bolshevik hoards at bay!

I was posted to Germany as a motor mechanic. I was there for two years. I was in the Eleventh Armoured Division, but most of my work wasn’t on tanks. I was with a brigade headquarters. I mended their lorries and jeeps and things. I was in the REME, so I was moved around quite a bit. I was with a light aid detachment first. Then I was in a complete tank recovery service with lots of REME personnel and such. After that I went to the headquarters of the 33rd Armoured Brigade. I was looking after the lorries and things there.

There was a military police unit on that camp and I looked after their vehicles. There was also a signals squadron. I helped to look after their vehicles and so on, along with others. We went on various manoeuvres in Germany, especially along the Russian border. We were trying to keep the Bolshevik hoards at bay – me and a few others! I was based at six different units at least. Eventually, although I was a regular soldier, I got demobbed after three years. It was what they called a three-year reenlistment.

Out of the army; a change of direction, from mechanic to watchmaker

I came out of the army in 1955. I was twenty-something years old. I was what they call a semi-skilled motor mechanic. I went to work for Mann Egerton’s in Norwich. I was there for twenty months. I worked on their commercial vehicles, lorries, vans and things, at Rose Lane.

I was still living in North Walsham. I was courting and got engaged to my wife. She lived in Stalham, then she moved to North Walsham. I used to commute to Norwich on a motorbike with my wife on the back. It was a Triumph Speed Twin! It was a bit too fast, really, for me. Just before Christmas in 1956, on a very foggy day, I bashed into a lorry. I was out of work and in hospitals for treatment for about three years.

When I came out of hospital I was a bit disabled. I couldn’t lift heavy mechanical things. I did try for various jobs, but when they found I was disabled they didn’t want to know. So I went on the dole. I was on the Club first, and then on the dole. I got married in the meantime. I went from my marriage home in Brunswick Road in Norwich to Letchworth in Hertfordshire. There was a government training centre there. I did a year’s course on horology – or watch and clock mending.

An early interest in watchmaking

I first started getting interested in watchmaking when I met a soldier in Germany. He was in the REME. He was a watchmaker. He used to mend watches and other small mechanical things for the army. He was from Norwich. He trained at Ames as an apprentice. I used to go in his van, which had a lot of equipment, and we had little chats. He said we’d meet in the Star, which was at the end of Lower Goat Lane. I said, fine, but of course I got moved to another unit, and then I got demobbed. I had this motor-bike crash. I was in hospital and so on. That eventually led to me doing a year’s course in horology in Letchworth.

Passing the course; a move back to Norwich

At the end of the course we had a special test to ‘pass out.’ I got the right percentage in both practical and written. Then I went to join my ex-army friend in his workshop as a semi-skilled watchmaker. I was helping him out, and indeed I was learning quite a lot. He had a little shop in St Stephen’s. He said, ‘Why don’t you come and work for me? I can do with some help. Watch what I’m doing and take a few tips.’

I was with him for several months. We stayed in digs just off St Stephen’s Square together. Well, not together, we had our own bedrooms! Then he had to move from his shop because they were widening St Stephen’s Street. He went off to set up his own workshop. I went off to be a dogsbody at Ames jeweller’s shop in Goat Lane. From there I looked at a job in Coppings the jewellers in London Street as their watch and clock mender. It is now a coffee shop! I was up on the third storey mending clocks and watches.

I was there for eight years. It got to the point, when I was about 35, that I wanted to go on my own. I got a little shop in Elm Hill.

The shop in Elm Hill

Business in Elm Hill was good enough. It was interesting really. No two jobs are the same in watchmaking and clockmaking. I was repairing clocks and watches all the time behind a grill in the shop. I used to do my own work from the shop, and I did what they call trade work. I worked for people like Coppings, Winsor Bishop, several others, such as H. Samuel; Albrow & Sons; Jacoby Gems; Jans of Bethel St.; Timgems in Elm Hill and others!

But it can be a not very profitable business. You spend a lot of time sorting out problems and everything. Of course I met people coming into the shop. Sometimes not many, but the regulars used to come back for their clocks and watch repairs. I got to know several of them as friends. They sent me postcards when they went out and so on. The people who used to work at John Olivers, the hair people: the ladies used to pop in. The little Chinese lady used to come in. The man next door at the stamp shop, I used to do his watches occasionally.

Dealers used to come in. They tried to flog me expensive things, which I didn’t have any time for. Wheeling and dealing – I didn’t like that bit at all. I used to like working behind the scenes. And some of the regular customers who used to bring me work. That was quite good.

It was very seasonal really. You did better when the tourists came along. I had some people from the Theatre Royal pop in. They used to stay at the Maid’s Head, you see, and wander through. 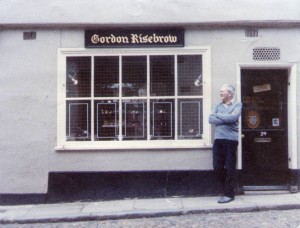 The shop in Elm Hill

Family and others help out

My wife worked with me, and did a bit of bookwork. My son used to run some errands for me when he was not at school. He went to the Norwich Cathedral school, the other Nelson School. And a young school-leaver used to come on Saturday mornings sometimes. She used to go and deliver some of my stuff and bring stuff to me. She was a little girl and I didn’t pay her much money. But she was very nice and she wrote me a letter when she left. ‘I was a good boss’, that sort of thing! She was a very nice girl.

I was able to make a living, just about. Sometimes it was touch and go. I managed to survive with the help of my wife, who looked after the children, went to work and everything.

Difficulties working; donating items to the Museum of Norwich at the Bridewell

I got glaucoma. My eyes were going. I found it very difficult, especially with small ladies watches and stuff. I managed to sell all my gear to a watchmaker and jeweller. I gave my other small spares to a friend down the road who is a watchmaker. Later I gave a lot of my stuff and photos of myself at the bench to Bridewell Alley. I went in and asked one of the staff if they wanted some old watch-making tools and some old watches and things like that. He said, ‘Fine. And any papers and stuff.’

I gave him my training books and photographs. A professional photographer come in. He said he was taking photographs of trades that were dying out. He’d come to me because of the battery watches that were coming in at that time. He took a very good close-up of me at the bench etc. I gave that to Bridewell Alley. Well, they may think it is rubbish and not bring it forward. One of the curators from the museum seemed very keen – or he was very kind. He said that any papers and photographs and books, they’d put my name on it and stuff like that.

Retirement on the last day of the twentieth century!

I was in Elm Hill for roughly 30 years. I got on well with my neighbours. I was the longest one there really. All the others were quite new. They gave me a send-off when I left. They gave me a photograph with a print, and some money which I bought a book about Norwich with.

I retired from there on the last day of the twentieth century. The very last day. I remember that! And then I retired. So that was that really.