Iona talks about her varied working life, spanning forty years, in teaching, at her husband’s hydraulics business, and as a volunteer.

As a child I helped pick strawberries and broad beans in the fields around Cawston where I lived. We moved to Norwich when I was ten. In the summer of 1969, after GCEs, I worked at Norwich Union. My job was called ‘underwriting overseas’, writing and filing card indexes. It was a bit boring, and quite hard work as we were dealing with difficult names of people coming over from East Africa when there was a big fuss there.

Training to be a PE teacher

After A-levels I passed the interview to train as a PE teacher at Dartford College in Kent – one of only six specialist PE colleges in the country at the time. My mum and dad took me down in our Dormobile for the interview which took all day and involved practicals, singing and doing scenarios. 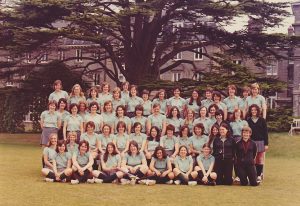 There were a hundred specialist PE students in each year. We trained for primary up to eighteen, and did anatomy, physiology and general education. As a second subject I chose Geography which involved field trips and projects. We used material from BBC children’s programmes. We did hour-long practicals from 9am to 6pm four days a week, Geography on Thursdays and theory of education on Tuesdays. In the first year we did all sorts of sports including netball, lacrosse, volley ball, badminton and basketball as well as swimming, dance and gymnastics. I specialised in gymnastics in the second year. We were extremely fit as it was sport orientated all the time. Bedford College were our biggest rivals and one day we managed to beat them at cricket in a home match and there was a great celebration.

We played matches on Saturdays and in theory we could relax on Sundays but we had to write essays on the theory of education and do our Geography work so I was pretty busy most of the time.

I lived in halls in the first and third years and out in the second year. Living out we had to bike across the notorious Dartford common where, supposedly, men were lurking in lay-bys but I never saw any. The worst that happened was being chased by dogs. In the final year I was on a mixed corridor. There were two men living on the corridor and the funniest thing that happened was when men tried to break in and chose their two bedrooms. They got a bit of a shock. We had everything provided. We had a break for tea or coffee, when three hundred people would come in for their buns and a little lady called Doris would call for extra doughnuts or buns because they had to keep our energy levels up. We had breakfast, lunch, and then tea at 6pm. Every night one person from each corridor would collect a third of a pint of milk for tea or coffee at night.  Everything was paid for, including accommodation, and we got a grant of about fifty pounds a term.

Teaching practice in Walthamstow was a bit of an eye-opener, coming from Norfolk. The school had 96 different languages. I had to live out because we couldn’t get from Dartford to Walthamstow in time in the mornings. On a Sunday night I’d go by train to London, then out to Walthamstow to B and B with a family. The son, who worked at Kew Gardens, had spiders, including tarantulas and other poisonous spiders which he used to keep in the bedroom we had to walk through. I had to go and look at them but they were not good.

I went to the school in the summer term, for six weeks, when they were doing athletics and rounders. You had to herd the children onto a double-decker bus to the playing fields, and were given a group you’d never seen before. You didn’t know who was in your group or who wasn’t. You wouldn’t have known if any absconded but we would come back with the same as we went, I think more by luck than judgement.

In my second year I went to a more progressive school in Swanley. The children were in houses, in mixed ages. I had to take a child with physical problems swimming. We watched her like a hawk. Although we’d been trained in first aid we were scared she would have a seizure or something. Nothing did happen but I was young, about 19, and it was a scary experience.

My third teaching practice was in Dagenham, again living out. You’d arrive at the school and were lucky if you saw a teacher to tell you what you were doing for the next six weeks. We had to write the lesson plans for every lesson. My lecturer came one very blowy day when I had a netball lesson with a few thirteen to fourteen year olds who didn’t really want to play. I had to collect all their bangles and necklaces and put them to the side of the court, with the spare bands as it was only a five-a-side match. The main criticism was the time I took to collect the jewellery and that the bands had blown across the court.

During the summer holidays, before I started my first proper job, I did shift work at Smedleys, the canning factory in North Walsham, with a lot of Irish girls from Belfast, I think. We had to inspect the fruits and vegetables on the conveyors for snails or stones or anything like that before they were washed. They had three lines. The Marks and Sparks line with nice big fruit went more slowly, the Smedleys was the medium and the Tesco’s line had the small, misshapen fruit.

You had to come back to County to apply for a job and my friend and I were interviewed at County Hall. Norfolk were reorganising their education and we heard nothing for months. They’d lost our papers. I’d already been looking for jobs and in September 1974 I started at Hethersett Old Hall, a small independent day and boarding school just outside Norwich. We had children with special needs who were taught in very small classes or individually. Some children were 16 and 17, only five years less than me. There were lots of grounds and an open-air swimming pool. We did netball, lacrosse, rounders, tennis, and dance and gymnastics. We had to change from lacrosse to hockey as there were so few schools playing lacrosse, so we got more fixtures which was better really. 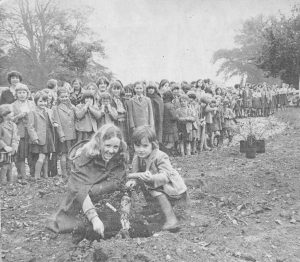 I did my probationary year there and stayed on for another five years. At the time a number of independent schools closed: Lonsdale House in Norwich, All Hallows at Ditchingham and Runton Hill out on the North Norfolk coast, so we took their children in which kept our numbers up. When I left they were improving the sports facilities. I could have done with a sports hall because we had to share the inside facilities with the music department. The hall was the size of a badminton court and, with the grand piano there and 20 to 30 children, possibly more, you were a bit squished, so we prayed for fine weather otherwise it was a nightmare.

Working at the hydraulics firm

I met my husband when I worked at Trowse as a voluntary ski-instructor. He had a small hydraulics firm near Wymondham so when I left my teaching job I worked for him, delivering, packing and sending out stuff. In 1984 we had a new factory built in Spooner Row. I put the stock on computer and in 1994 I went on a 20 week quality system course at Norwich City football ground. We had to write the manual for ISO 9001 which included all the work instructions for manufacturing and design. It took three years to implement in our factory. It’s very stringent and if the auditors found too many non-conformities you lost your certificate. We were doing work for Sizewell and the armed forces so we had to have certification. In 2000 I did a certificate in marketing at City College. I’d given up gymnastics and ski-instruction because I had dodgy knees and I had family at home and was looking after an elderly parent until she had a bad stroke and had to go into a home in 2005.  This coincided with downsizing at my husband’s work so I got back into school at the Hall as a volunteer.

The Old Hall School in Norwich was a special school for children with both learning and physical difficulties. I helped with the swimming. In January 2006 I applied for a job as a Teaching Assistant at Taverham High School to work with a Year Ten boy with special needs, and then moved to Long Stratton High School and worked with a boy with Asperger’s syndrome from Year 7 right through to Year 11. When I read his portfolio I didn’t know if I could cope with a child with so many problems but he left with eleven GCSE’s and went on to college to work with computers so that was a real success story for me.

You noticed the changes in teacher training. They sit in the classes, work with the teachers and go away with all the material. They can refer back to the teacher and have mentors in the school. We were almost completely abandoned on our teaching practice. Everything is more geared to health and safety and safeguarding, things we wouldn’t have even considered. We used to take children out in cars, and took them abroad and we didn’t have things like risk assessments.

My most rewarding and enjoyable work was as a special needs teaching assistant. You get success with children playing in teams but you had a much closer relationship with the child and could watch the progress.

I retired in 2015. Children were very different from those I’d known forty years ago. Behaviour and discipline is different and reaction to the parents. You know when you’ve had enough. I still do a lot of voluntary work to do with history and archaeology so I’ve got plenty to do. 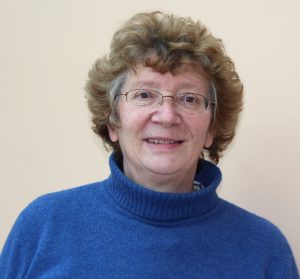 Iona talking to WISEArchive in Hethersett on 25th April 2016