Eileen started work as a secretary  in the transport department at Colman’s and experienced the wartime bombing. She met her husband ‘across a crowded room’ at Colman’s. He became Operations Director and had a long career with the firm.

I was born in Lowestoft. Mother died when I was three months old and I was passed between family members. I was placed with a foster family at age three and adopted at four. My adoptive mother ran a boarding house during the summer and I would help carrying things, clearing tables and washing up – I didn’t learn to cook though. I also had to shop at lunchtimes going back and forth from school. It kept me busy; it’s been good training for life, I suppose.

I got a scholarship to the Central School in Lowestoft, but war was imminent and a port was not the place for a teenager, full of sin, soldiers and so on. So Mother got in touch with my relatives in Norwich who kindly took me in and I’ve been in Norwich ever since.

My uncle and aunt were very good to me and lived on the corner of Cecil Road and Grove Walk. They took me to Miss Allen’s in The Close – a commercial secretary college – to learn shorthand, typewriting and bookkeeping. I was very slow with shorthand, not very good at touch typing and hopeless at bookkeeping. I was always bad at maths, but it was expected for secretaries. I was there for probably two years.

My neighbour, Mr Finch, worked in the transport department at Colman’s and helped me get a job there in 1939. Uncle Percy also worked at Colman’s. Miss Cooper interviewed me for the job. She was very nice, very efficient and kept us typewriting away. I worked in the transport department in a room with other ladies; we each had our own desk and typewriter and used the old manual typewriters; the Imperial. I still have the typewriter; they gave it to me when I left – a heavy thing! We didn’t have to wear a uniform. 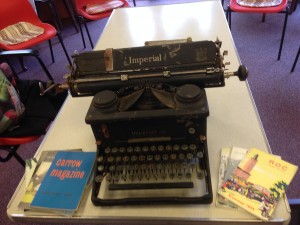 Our boss was Mr Carey and he was perfectly alright to work for, no trouble at all. He had very efficient secretaries of his own, so my work wasn’t for him. I took dictation in shorthand for Mr Finch. When typing we used carbon papers to make at least one copy. If you made a mistake, you had to redo it – accuracy was very important. We would type, ‘Dear Sir, thank you for your letter…’ and that sort of thing. We didn’t have to take things to the post room; it was always collected and I didn’t go into the factory or other departments; I stayed in transport and despatch at Carrow Works.

The department was quite a big place. Colman’s had vans, lorries, a railway line and barges. The vans had Colman’s painted on the side, probably dark blue with yellow writing. There was a connection with Hull, so barges brought things for the flour mill. Trains would come and go too. Colman’s had a lot of departments like tin, print and research; they expanded a lot. They made different mustards and starch. Gentlemen had starched collars then.

I started on five shillings a week working full time, Monday to Friday. It was a good sum to live on as I lived with my aunt and uncle, so I didn’t have to do any housekeeping or anything like that. I had a bicycle but cycling up Bracondale was a little bit tedious to get to Carrow Works and the office. There were a tremendous number of cyclists and Colman’s had their own special shed.

Part of your salary was your lunch; they called it the Luncheon Club. The room was separated with men at one end and the ladies at the other. It was where I met Philip; we looked at each other and that was it – ‘Across a crowded room’ – we just knew. Philip studied engineering at City College before joining Colman’s as an engineer in the twenties – he retired in the sixties. He kept an eye on the machinery making mustard and starch. He was a very clever fellow.

Another time, I saw him getting up from lunch and I thought, ‘Well, I’m getting up too’. I got my bicycle and cycled up Bracondale and he followed. I think he said, “It’s a quite a hill, isn’t it?” That was it! We would ride our bicycles at lunch time together but had to back by 2 o’clock.

Carrow Works was bombed when I was still at Colman’s; the railway and river were targeted by bombs.

Daughter Ruth: You’ve told me that you normally finished work at five but you had stayed late to finish something when the sirens went.

Yes. We had to go into the shelters. I was lucky. We were also bombed in Cecil Road where we went into the shelter in the garden and when we came up one or two houses were damaged. All our windows were gone as well as Mr Finch’s across the road; the planes came down in a line dropping bombs. Next day, crowds of people came to look at the damage. I suppose it was frightening, but like many things in life you had to accept it; we just got on with it.

Miss Stancombe was in charge of the canteen and she was very good. We were very well fed even through rationing. She was a very nice lady – adored by male and female alike.

During the war everybody had to do something and I decided to do nursing. I went to a hospital in Essex. I wasn’t trained but I still nursed anyway. Philip went into the Navy, so I didn’t avoid soldiers by leaving Lowestoft! I left Colman’s after the war when married in 1945. It was happy ever after with a lovely family. I’ve been very fortunate.

Colman’s would send the ‘Reckitt and Colman’, magazine to employees who went to war and some would write back. Philip wrote something for it in 1952. They were beautiful magazines. They covered the Coronation and there’s a picture of Colman staff with a float.

Colman’s was very kind to their employees. It bought a lot of property on Bracondale for employees, which was handy for Philip. Everyone who lived on Bracondale worked for Colman’s and when we married we moved into the middle flat of three in a converted house in Bracondale. Philip continued working for Colman’s and became Operations Director in the end. He was able to go to quite a few places. 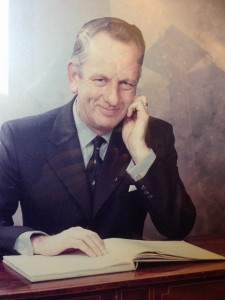 Ruth: It was mostly to do with Robinson’s – he travelled to Israel a lot as well as Spain and America. He used to bring products home from the shop at the weekends, and you tested some of the products. The home brew kits were very exciting but we weren’t impressed with one of the first ready meals. The merger with Coleman’s (a wine company in Norwich) meant they started producing wine too. Colman’s was certainly a huge part of our lives. My father worked on Saturday mornings which meant he didn’t have much time off at weekends if he had to supervise social aspects as well.

He even had to entertain business people, though he would take them out rather than bring them home.

Ruth: His social life revolved around Colman’s: he would support the sports teams, and even played hockey for Colman’s. He had tickets to Carrow Road because it was originally part of Colman’s.

He was a great sportsman. He loved his sport, played rugby and supported Norwich City. I stayed in the background. I have no idea why people throw, catch or kick balls!

Colman’s introduced pension schemes very early – even for ladies which was quite unusual. I didn’t have a pension because I didn’t work long enough; Philip did though. There was a bonus scheme which we called ‘Prosperity’. We were given a lump sum which helped and I think every month people were given some mustard, or starch, as a bonus. We were given something at Christmas and there was always a special Christmas lunch.

Eileen Durrant (b. 1924) talking to WISEArchive on 6th October 2015 in Norwich. Her daughter Ruth also participated.