I was born in 1931 in Union Street, Norwich. I lived there with my mother until she moved to Victoria Street, near the Norfolk and Norwich hospital, and my mother was there for 39 years. My father was in the army for nearly all his life, from when he was young until he passed away, so had a life of going overseas several times—I think he enjoyed that. My mother worked in a boot factory. She was a ‘passer’ and she used to do what they called ‘finishing’. It was her job to check all the shoes to see if they were quite perfect before anyone bought them. She used to walk to work every day—it was quite a way and you wouldn’t believe how quick she walked! She always came home to have some dinner, never missed the dinner, and I suppose she only had an hour to do all that: to get home, have dinner, then get back to work. My mother enjoyed her work and was good at it. She lived until she was 92 and a half; a very good long life. She was a wonderful mother.

When I was four years old, I went to the Catholic school in Willow Lane. My grandmother took me there but I didn’t want to go in, so I tried to pull her in with me—but she wouldn’t have any of that. I was at that school until I was 10 or so, then my mother made arrangements for me to go to the Girls Model School on Dereham Road, which was a very good school. I got on really well: I learned French, I learned to sing, and of course I liked doing the exercise classes, which we called PT. I was 14 years old when I left school and had to look for work. My birthday is in July and by August 7th I’d started in a job. So, I only had a very wee time in between where I went strawberry picking and I gave them all to my mother. From then onwards I worked and had a holiday perhaps once a week in a year, but I was quite happy.

My first job was at W. Copemans, a wholesale grocer’s. This was during the wartime, so naturally there were a lot of jobs that had to be done. It was a very nice place to work, quite a big business. I would wake up early and cycle there for 8 or 8:30. You would clock yourself in with these cards so that they knew what time you were there for work, so you had to be on time. We were all on rations then. We had a little office where all the rationing was put on things—bacon and so on. There was an old-fashioned telephone where you turned the dial with your hand. We had rationing books until the war ended, but I think various things stayed on ration like sweets for children, so you would take your book and use it to get sweets, chocolate, anything like that. Of course, when the war ended everyone could get everything they wanted, and all the children were spoilt! But during the war, times were very hard. It was a busy time for all people. They built shelters for the bombing—you were very tired because you would go down into shelters and stay there all while the horn sounded because of fliers from Germany. The war was awful, but those things went on and you had to take it in good heart.

I lived with my mother while both of us worked. I was paid seven and sixpence, 7 shillings and 6 pence a week. I thought that was wonderful—of course, it wasn’t all that good, but it was wonderful to me. I had to give my mother 5 shillings a week, but she still bought most of my clothes, so I couldn’t grumble at that. My boss, William Copeman, was Lord Mayor in 1946. There were dreadful floods going on in all the coastal places, Sea Palling and so on. 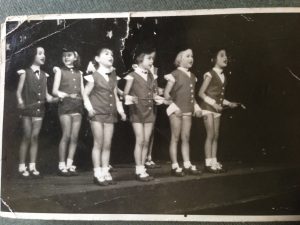 The Theatre Royal put on a show to raise money for people who had lost their homes and luckily, I was in it. Because he was the Lord Mayor he couldn’t refuse me when I asked for a few afternoons off work to rehearse at the theatre with my friends. He even came round to see us all. I loved every minute of it. I had been dancing since I was about 7 or 8 years old. My first teacher was a lady who was a very good pianist and she used to sit, smoking a cigarette, whilst we were all dancing. The bigger girls would teach the younger ones whilst she sat there panting away. It was quite funny, but my mother was disgusted! She came down to watch one day and, of course, there were a lot of kids eating fish and chips in the corner, which she didn’t approve of. She said ‘don’t ask me to come anymore to your dancing’! I still had the money—lessons cost one shilling—so I still kept dancing.

I left Copemans when I was about 17 and went to work at the British United Shoe Machinery. This was a business that fixed the shoe-making machinery in factories. Norwich was a very big place for shoes and we had lots of factories to send our repair men to. It was a place where mostly men worked, but I was in the office handling the telephone to start. I worked there for quite a number of years and was there until I married and had my first baby. I stopped working but I did carry on dancing a little. I taught children to dance and I loved doing that. It was my pride and joy to see the children dance. My mother-in-law would look after my daughter for a couple of hours whilst I taught classes—until television came out, of course, and the children would rather sit and watch television than dance.

I was in several dance shows myself and appeared on television. I danced with a friend named Sheila, who was born in Singapore before coming to Norwich. We were only very little when we first met at our dancing troupe, but as adults we were called the King Sisters. It was a joyous time for us—we had some very good shows, going to posh hotels and filming our dances, but we didn’t travel around the country, it was all local. We once appeared on Anglia Television for a show called New Faces. It took all day to rehearse and finally at the end of it they filmed us, and soon after we were sat there, watching ourselves on the television. We thought it was wonderful. We would write out little cards and send them to people we knew, so they’d know what time we were going to be on. We really enjoyed watching ourselves. I’d make the dog sit very quietly when we were on! We didn’t earn much money doing it, but I did some other work after I had my daughter. Sheila and I weren’t always doing the same shows but we loved it. Dancing was our pleasure. 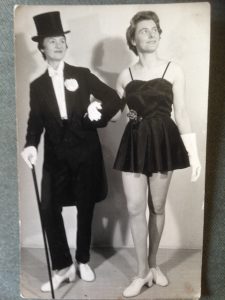 At one point, we ran classes at the St Peter Mancroft Dance Hall. It was a very nice little hall; my aunt used to be Sunday School teacher there. As a teenager, my friends and I used to down to St Peter Mancroft Church on Sunday for the service. That was one of our enjoyments when we were young. It was only girls in the dance classes. We’d start with the little children and then have the bigger ones later, because they could stay longer. My husband Phil was our pianist, he was very good on the piano. That was one thing I couldn’t do: I’d love to have learnt, but it was just one of those things. We’d teach tap and ballet and little songs that were easy to sing. Sometimes we’d do shows for the churches, putting on what the children had learnt and giving the money to the vicar. We didn’t do pantomimes—the children were too young and excited for Christmas. But they were all very good. Their mothers would bring them and stay to natter to each other, while the children learnt a thing or two.

There were about fifteen children in each class, and quite a lot in the grown-up group, including myself and my friend Sheila. When Gillian was born, I would even take her too because I couldn’t leave her at home. They all made such a fuss of her. I didn’t go back into teaching straight away after having her; it was a little time before I went back. But I did go back to it because you miss it so much—I used to enjoy it. Eventually, I had to give up because my pianist was charging too much and I didn’t get enough children attending. That was the end of my teaching. 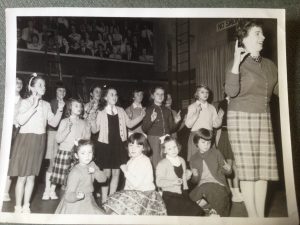 My husband, Phil, was a comedian, and a very good one! We took up running bed and breakfasts. We had one in Torquay, down in South Devon. It was a busy place. We had a restaurant with an old-fashioned stove and I did the cooking. It was very hard work, very tiring, but I enjoyed it and we had some fun with it. You get to know various people, what they do and all that. We had regular customers too. Once, when we were in Devon, one little crowd came to see us. They were on their way to Cornwall but stopped for coffee and so on, but my husband was so funny. He’d begin his jokes and, of course, they never got as far as going to Cornwall, they stayed at ours instead! So, the next time they came on their summer holiday they said ‘we’ve got to try and get to Cornwall this time’, but they didn’t. He was making them laugh so much that they didn’t finish there.

After that, we had a hotel in a town near Cromer. It had 18 bedrooms and we worked very hard. We had chefs and staff to help, it was a lovely hotel but it wasn’t easy. Once a year we used to get some schoolchildren. They’d take a bus, oh, sixty miles from quite a long way out, and the whole 18 bedrooms would be taken up. The teachers enjoyed themselves—they’d say ‘we can’t help laughing because your husband is just so funny’. They really laughed their heads off. 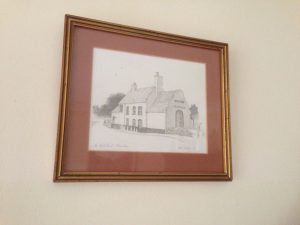 We took our first pub back in Norfolk, the White Hart at Marsham. That was a lovely pub and we were there for a little while, but the breweries were all charging far too much, which we didn’t want. So, we went to a little pub called The Baker’s Arms and that was our last place, we retired from there. We both worked behind the bar for long hours. We had some people come and help, a young fellow would help us with the bar. There was a home near the pub and we’d save up for them on our counter, then at Christmas we could go and give them food and a party and someone would dress up as Father Christmas for them. They were very pleased with us!

Then we retired and had some very nice times. Spent some time going over to America, visiting my husband’s sister in Hawaii. We had some lovely times in Hawaii. It’s the only place I know where if it rains you can carry on swimming because the water is so warm—nothing like the Norfolk coast! My favourite part of my working life is probably working together with my husband. He brought a lot of life into my life and, you know, I had someone to boss me about. It was all hard work but we really loved every minute of it. 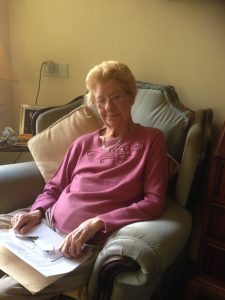 Beryl Johnson interviewed in Norwich for WISEArchive on 14th October 2016