Henry is a Norfolk farmer whose ancestors came from Scotland to Norfolk. He talks about his working life and the changes which have occurred since his family arrived on the marshes.

The early days: farmers move from Scotland to Norfolk

How it started was predominantly my predecessors came to Norfolk and parts of Suffolk from 1900 onwards. The biggest move was from about 1925 to the Second World War in the agricultural depression period in East Anglia. What commonly happened was that various members of the family and extended family would be settled in Norfolk. They either bought land or became tenants and there are some great stories about the land for free as long as they could have a 70 cow cowshed built as part of the mixed farming system they wished to adopt and so one member would come here and establish. The others would come and visit on holiday and look for the right opportunity and the person would basically find them the right opportunity hopefully. Or hear of something coming around and that’s basically how various members of the family got established. My own great uncle, Alan Alston, who was the first of my immediate family, came in 1927 to Green Farm, East Tuddenham.

My grandfather came in 1930/31 to Park Farm, Wymondham. He was one of the many James Alstons. And my great uncle Willy, whose farm I am fortunate enough to have, came in ‘37/38. And that’s basically how it started.

The family were attracted to Norfolk because of the world of difference of the opportunity of farming. From pure livestock on the side of a hill in a valley in Scotland which they all came from Ayrshire compared to Norfolk. It was boundless.

They all came down to Norfolk. Many of my family and other Scottish families from the Ayrshire area and other areas that came at a similar time, all brought their cattle on the train. It was quite common to milk them before they got on the train in Scotland and milk them in Norfolk when they arrived and so most started with Ayrshire and then gradually over the years went to British Friesian and then those who kept on in dairy ended up going, predominantly, towards the Holstein. The Ayrshires did well in Norfolk because of the better forage and the climate.

The marsh grazing, the amounts of grazing and on the flat were plus factors. It was a help rather than a windswept hillside.

There’s an awful lot of Alstons and others Scottish families still farming here today. Families who came down from Scotland were a number of Paterson families; a number of Cargills, Mawsons, Donalds, Kerrs who are predominantly in Suffolk and many more families.

On Martham Island, many, many happy days were spent riding around on the tailgate of my father’s vehicle and then chasing cattle around the tracks off the marshes to the pound in the middle of the island and it was ideal for a boy who was interested in agriculture to have that freedom and involvement chasing cattle around Heigham Holmes. In 1937/38 my great uncle bought the majority share on Heigham Holmes. Which, then between my uncle and my father, we then ended up owning the whole thing until we sold it, as a family, to the National Trust to buy other, more productive farmland.

We used to milk cattle on Martham Island. In the middle of the island is the farmyard and in its heyday there were two 70 cowsheds there, so 140 cows could be milked there in stalls. In the days we took the cows to the grass and not the grass to the cow. This went on until the early 60s when my father put a stop to that and it was fraught with issues of the ferry and milk tankers and also we had herdsmen travelling from Billockby to Heigham Holmes on mopeds and they were falling of the mopeds and injuring themselves. And the next phase was to use Heigham Holmes to make a lot of hay to feed the cows in the winter and the cows would be milked at Billockby all year round.

We are still the tenants of Heigham Holmes which now, under its conservation parameters, is just summer grazing.

Taking over the farm and building up the enterprise

Sadly, my father passed away when I was 12 and so two uncles, Alan Alston and Gavin Paterson – who was also my godfather – took round the business until my brother and I were able to take over and take an active role along with my mother. Prior to that I went to Agricultural College and I had three very happy years at Cirencester. I’d done some travelling before college and came back and started to get involved because my uncles, as trustees were looking for me to do that. I was just rising 23 when I started and began to get involved in the management.

When I first got involved we farmed about 1500 acres, all told, and now through fortunately being able to purchase some land and also the, more the, introduction of contract farming: farming land for other people on profit share basis, we have managed to build the business up quite substantially from where it was.

We now farm for six other landowners. And we farm arable-wise over 4000 acres, towards 4500 acres and then we have our own grassland on top which amounts to about another 600 acres. The arable side has increased substantially over the years through being able to purchase good quality land and also to farm for other people which has been a significant factor.

We have 300 acres of drained marshes and most of those were drained in the late 70s, early 80s and we’ve continued draining bits and pieces where possible over the years. Most the marshes are alluvial clay and patches of peat ideally suited to wheat and rape. We have grown sugar beet on there and on occasion we have grown peas on there as well. Elsewhere, we grow an acreage of potatoes. Certainly, that doesn’t involve the marshland because that isn’t suitable at all being too heavy a land and too low lying. But we grow about 550 acres of potatoes within that area for McCains.

Our geographical area of the farm is from Rackheath which is north east of Norwich to Strumpshaw, down to Caister to Waxham: in that sort of triangle predominantly.

Farming has changed hugely. We’ve gone from the 80s which was purely production led then we had the introduction of the ESA Schemes in the late 80s to encourage grazing and more softer management for conservation of the grass marshes. Then, of course, in ‘92 we had the introduction of set aside on the arable side which the marshland being the lesser arable land in the area was the obvious target to use set aside on. Now we have all the WRAP schemes where we can’t spread or fertilise within so many metres of a water course and all the marshes are surrounded by ditches and water course. It has limited what we can do. To some extent it has made the marshes less attractive for farmers.

Conservation bodies have a huge impact because they are extremely well funded from their donors and they want to come in and buy blocks of marshes together to try to prove their way is right which is a balancing act.

If we go back in history, the Milk Marketing Board was formed, I think in 1931 or 2. That was a great saviour to a lot of farmers because it gave a stable, average price in the UK. Then, in 1983 we had introduction of milk quotas. I would like to make the point that the UK has never, ever been self sufficient in milk and dairy produce. Not even in ‘83 when there was talk of Butter Mountains and Milk Lakes in Europe etc. And we were basically given a quota to produce 90% of the milk we previously produced.

Then it was all decided that free trade was the way and the MMB was disbanded in 1994. I’d started farming in my ’93/94 and I could only see the devolution of this archaic MMB would be positive for milk prices. This lasted for two to three years and we saw the milk price rise from 22p roughly to 26p and we all thought this was wonderful and here we go, here we go. Needless to say it crashed and has been treated as a mere commodity ever since. We persisted in milk production and tried to expand through it and become bigger and more efficient and so on and we got up to 450 cows, all the year round calving on an intensive system to a large co-operative milk buyer.

And we invested in a new parlour in 2009/10 when the world predictions were that there was going to be a steady 2% growth in demand for dairy produce annually. But the world could not keep up with. However, we then saw, which was unforeseen, the Russian embargo on dairy produce and the Chinese embargo on it and we saw, worldwide, three wonderful milk producing years worldwide with grass growth etc etc. And we saw the price drop from 33p a litre which we were getting to 19p. I made the decision that we were haemorrhaging money at a huge rate and there was no light on the horizon so we should stop. We sold our cows in batches as they calved: The principle being that we weren’t going to take the market all at once and the principle also being that we’d maximise values of fresh calved production animals ready to go. And we kept the calves and the young stock as a separate venture to graze on permanent pasture.

I then have gone on from that to, we still have a heifer rearing enterprise on the grass, but we did what I can only describe as bed and breakfast of a herd of cows for a man from the Isle of Man. The big difference is I sold the remnants of my last milk in October ’16 at 19p. 12 months later I sold this milk from this gentleman from the Isle of Man produced here in Billockby for 31p a litre. Quite a volatile market inside 12 months.

We will continue to have livestock because of our area of grassland: permanent grassland. At the moment we have a heifer rearing enterprise. We are putting our heifers: we are serving them with sexed semen so we should get a heifer calf every time. However, we have to run a sweeper bull with them because the AI doesn’t always take so we do get some bull calves but our bull calves are greatly reduced through using sexed semen. I would like to think that we might look at going back into milk production in a smaller, simpler way in the future as I still have a mothballed unit and a good milking parlour and one herdsman left. However, it all depends on market forces. 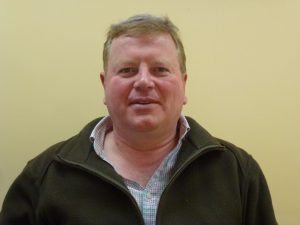