From an early age, Connie had a succession of jobs, often juggling more than one at a time to make ends meet but it was not until she reached retirement age that she found her passion, fencing. A passion, which in a different age, might have formed the basis of a fabulous career.

I was born in Norwich in 1927 and brought up by my grandparents. Even from a young age, I had to work, firstly looking after my grandfather’s chickens and helping my grandmother around the house and then at about age 7, I got my first paid work, cleaning out the rabbits for the lady at the local pub and for that I got 6d and a bag of crisps and as I got older I ran a regular errand service for neighbours at 1/2d a time!

I left Angel Road School at 14 in December 1941 and got a job at Steward and Patteson’s brewery which I thought would be exciting. It was not….it was very hard work. I worked on a bottling machine with other women all wearing boiler suits and wooden clogs. It was heavy work and very cold with the doors left open so that barrels could be brought in and full crates could be taken out. Every night I would come home and cry because I was aching so much. I earned 14s a week of which 10s went to my grandmother and 4s for me.

A few months later in April 1942, the house two doors away from where I lived with my grandmother took a direct hit and our house was completely destroyed. We lost everything. We moved in with my mother, who was now married to the landlord of the New Star on Quayside and because I had nothing, the ladies at work all brought in clothes for me.

I also worked as a bookie’s runner in my lunch hour to earn extra money. I took illegal betting slips from punters to a betting shop on Elm Hill. I got 6d if he won and nothing if he lost. 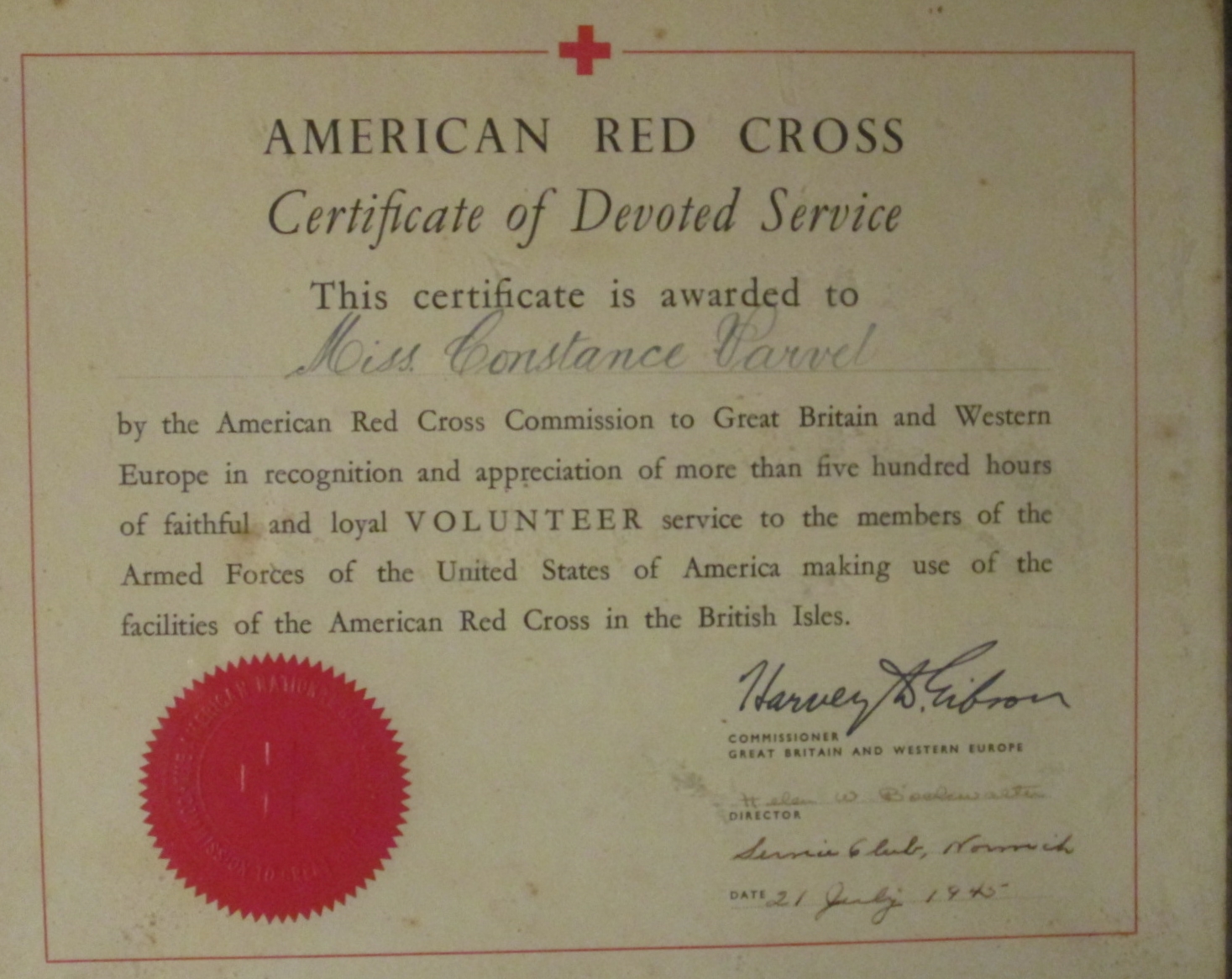 Volunteer service for Members of the US Armed Forces

Then my step-father won about £800 on the pools and with that my mother bought a car. I was just about old enough to learn to drive so she paid for four or five lessons. During the war, the requirement for driving tests was suspended so I became a driver. We got petrol illegally from the Yanks who came into the pub for about 2/6 a gallon to keep the car on the road. With the car, I started taxi driving part time so I was probably the only lady taxi driver in Norwich at just gone 17!

I got married at 20 in 1947 which meant I had to leave Steward and Patteson’s as they did not employ married women. We were still living with my mother at the pub but I got a job with a newsagent who had a shop at the top of Quayside on the corner of Fye Bridge. I used to drive his van to collect and deliver the papers, collecting them in the early morning from the Eastern Daily Press office and then delivering all round Thorpe before getting to Laurence and Scott’s by about 7.30am as the night shift finished to sell the workers the morning papers.

We then moved out of the pub into a requisitioned house on Rosebery Road with my grandmother. These were empty houses which the government took over to rehouse those who had been bombed out. My daughter, Pamela was born in 1949 and I finished work for a time. Then my husband walked off the edge of a pavement coming home from work and broke his ankle. He couldn’t work and we had no money. My grandmother volunteered to look after the baby so I got another job at Mackintosh’s packing Weekend Assortment.

That was great, working on a conveyor belt with lots of other people in the warm although the hours were long – 8 till 6. There were also other perks – at the end of the week, you could buy ‘waste’ misshapen chocolates which were always sought after because sweets were still on ration. They also had baths upstairs. We did not have hot water or a bathroom at home so, a couple of times a week, instead of having a lunch hour, I would take my sandwich and sit in the bath and eat it.

I worked at Mackintosh’s for about five years until my second child, Robert was born. By this time, we had a new council house on the Avenues. I would take my daughter to school and then take Robert with me to go work in the fields picking whatever was in season – potatoes, sprouts, beans. This way I always managed to earn some extra money to keep our heads above water.

When Robert was about one, I went back to Mackintosh’s in the evenings. My husband who worked as a school caretaker put the children to bed. This was more regular, better money and was in the warm! I stayed working evenings at Mackintosh’s for some years with a break when my second son Ian was born.

However, when Robert started school, I took another job as a leaflet distributor and because I could drive and had a car, I was the manager and had four ladies under me who actually delivered the leaflets. Also, because it was my car, I could take Ian with me so I did not have to worry about childcare.

Once the children were all in school, I saw a job advertised in the local paper as a driver. My husband said that it was not worth applying as they would want a man but I thought, if they want a man, let them say so. I applied anyway and was interviewed but did not get the job. However, a couple of weeks later, I had a phone call offering me a different driving job with a very influential businessman, initially just taking a child to private school and picking him up again at the end of every term. It was a part-time job which allowed me to continue working on the leaflets. However, over time I did more and more driving for him, going all over the country to all sorts of places, to Buckingham Palace and to Sandringham. Every year at the shoot season, I would drive up to Scotland with the guns and the dogs. He would fly up from Norwich and we would meet up at Edinburgh Airport and he would take the car and I would fly back to Norwich. This job lasted for 27 years until I was 77 and I finished just because he finished.

Once my children had left home, I now had the time and the opportunity to do other things. My husband worked at Town Close School and they were looking for another assistant to accompany the boys on ski trips to Aviemore. So I did that for a number of years and learnt to ski quite proficiently.

I also wanted to try ballroom dancing. My husband was not interested so I decided I would go by myself to learn. I enrolled with a teacher on Colman Road and worked my way through all the grades and earned lots of medals. I was going to give it up but the teacher persuaded me to stay on to help her teach other ladies. I had to go back and learn all the men’s steps to do it. I then started tap dancing and got as far as grade 8 but two knee replacements put an end to the dancing.

Meeting my father and the fight for Lady Freemen of Norwich

I am illegitimate, which was why I lived with my grandparents. I knew who my father was but did not attempt to meet him while my grandmother was alive. She died when I was coming up to 50 in about 1977 and as my mother and step-father had also passed away, I decided I needed to meet with him. So I went to his home at Christmas with a bottle of sherry, knocked on the door and introduced myself. He said ‘oh my God, I’ve been waiting all this time to find you’. I replied that ‘you can’t have looked very hard because you only live in Magdalen Road and I lived on Quayside’. Anyway, we had a hug and a long talk and kept in contact until his death years later.

I learned from my father that he was a Freeman of the City of Norwich and that, if I had been a male, I could also have been a Freeman. However, Norwich did not allow women to become Freemen. Other cities, such as York and Ipswich, accepted women so I started a campaign with the help of a lady in North Walsham and between us, we lobbied Councillors, MP and all sorts of people. Eventually after nearly 10 years of campaigning, in 2010, women were permitted to join the Freemen of Norwich. A special ceremony was held in St Andrews Hall where over 250 women were admitted as freemen of Norwich. I, because my surname began with A had the honour of becoming the first lady Freeman in Norwich. 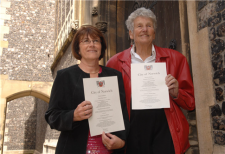 Fencing – it made my life

After I had given up dancing, I had no thoughts of taking up new challenges. Then when I was coming up to 60, I decided to go to a ‘come and try’ day organised by Norwich City Council to encourage retired people to get involved in sport and exercise. I thought I would try fencing and archery. I went to Duke St and had a few fencing lessons and found I could do it brilliantly. I was hooked and have never looked back. It has completely changed my life. I have earned over 140 medals and been selected as a member of the Great Britain’s international veterans squad in European and Commonwealth Games as well as winning a bronze medal at the World Veteran Fencing Championships in 2011 in Croatia. Fencing has taken me all over Europe and I have also competed in Australia, New Zealand, Canada and Russia.

But not only is fencing my passion, it also led to other exciting opportunities. In 2012, I was honoured to be invited to carry the Olympic torch in Norwich. I carried it from Castle Meadow down the hill towards the Cathedral and into the Cathedral Close where I handed it to the next runner. You could buy the torch if you wanted but Norwich City Council gave me mine as a gift. 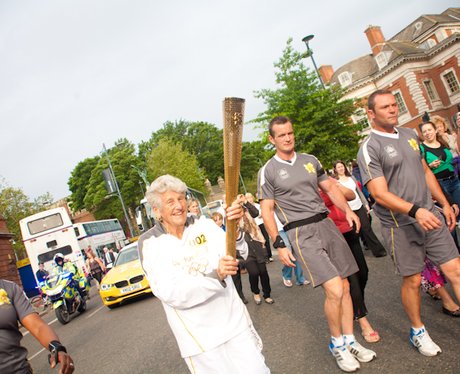 Fencing made me well-known and led to a number of television appearances, one of the best was as mystery guest on Russell Howard’s Good News when I taught him to fence on the television. People all over the world saw that and everywhere I go fencers would say ‘I saw you on Russell Howard. I also got involved in a programme as ‘Norfolk Celebrates Age’ which highlighted all the opportunities available to older people and applauded all their achievements. I had my portrait done and talked to groups of young people about getting older to show them that older people could still have exciting and interesting lives.

I’m 90 now but not thinking of hanging up my foils. I go fencing at UEA a couple of times a week, I play badminton, practice archery and play bridge. 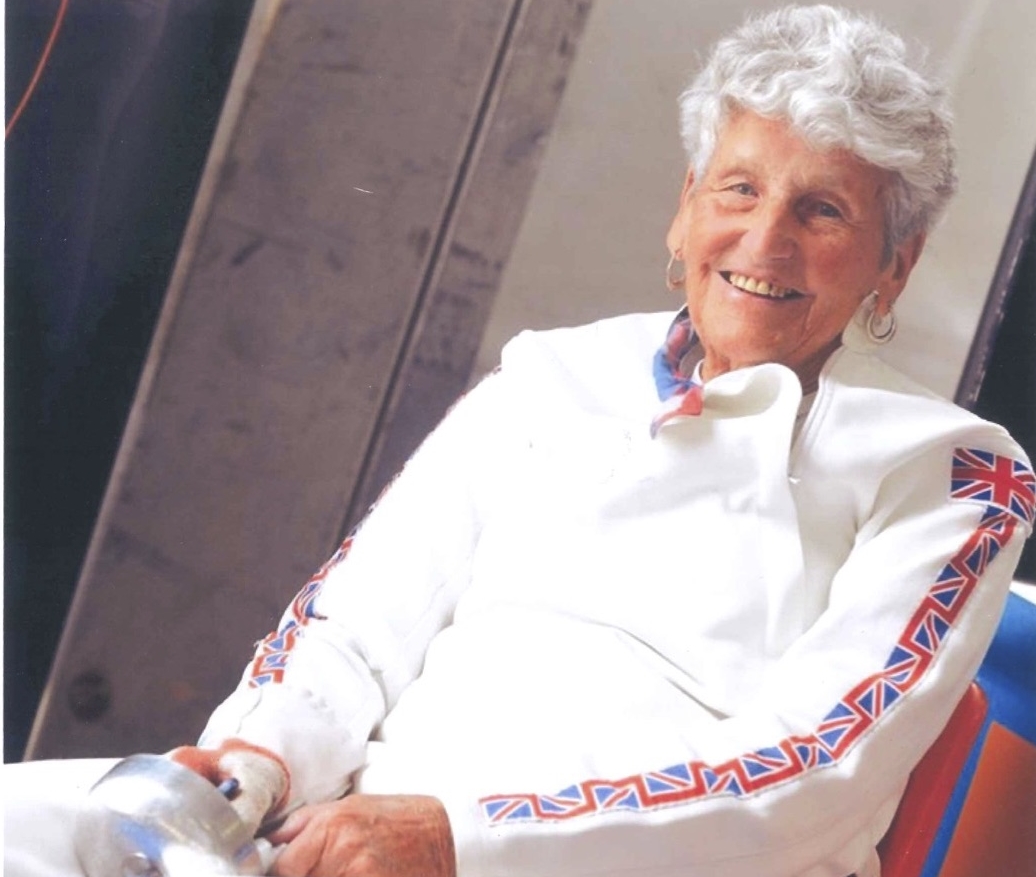