Tony tells us about his long business career, starting in accountancy at an engineering company through selling ducks to Denmark and ending in a company that gave him the opportunity to travel the world and provided vital equipment to the NHS during the Covid-19 pandemic.

My early life, education and starting my career

I enjoyed my time at school and went on to the Trent Polytechnic in Nottingham where I did a degree in economics.

Moving to East Anglia for a fragrant and flavoursome career

My wife is from East Anglia and has family in Norfolk and Suffolk so we decided to move down here in 1985. We initially rented a house in Lavenham in Suffolk because my wife worked in Needham Market and I worked in Haverhill.

I worked for a company called International Flavors and Fragrances. They are an American company. They’d been in Haverhill since the 1950s. Their site, which makes aroma chemicals and flavourings for food, is long-established and is part of quite a large American group.

It was while I was at IFF that the very first personal computers came into being such as the IBM XT and the IBM AT. The first computers at that time were used for things like word processing and spreadsheets. Lotus 123 was the main spreadsheet package. Obviously, that’s now been long replaced by Microsoft and Excel, but in those early days one of the first packages was Lotus 123.

As a young man I found it exciting to use the personal computers. It was really because prior to then computer packages had been on mainframe systems and analysis was done on big A3-sized analysis paper – all handwritten with calculators.

Being called International Flavors and Fragrances there were a lot of aromas in the factory. If you walked about the factory you got perfume on your shoes because the biggest product that they manufactured then was a synthetic musk oil. Musk oil forms the basis of lots of perfumes.

I moved on to work for a company called Manor Farm Ducklings. Originally – well, when I joined – the company was called H A Long and Sons. The part of Norfolk which boundaries the Suffolk border was a long-established area for the growing and processing of ducks. There was H A Long, which was founded in the ‘50s; there was another company not far away and there was a company just on the Suffolk border. There was a big concentration of duck companies in that area. I think it was all to do with the sandy soils – The Brecks. Ducks like being outside through most of the year so that free draining soil was ideal for the rearing of ducks. So yes, it’s strange that of the four largest duck companies in the UK three of them were actually based in that Norfolk and Suffolk border area.

The main variety we bred was the white Peking duck which was mainly reared for the Chinese market – Chinese wholesalers and supermarkets who then go on to Chinese takeaways. Your crispy duck and pancakes – all that sort of stuff. By far the biggest single market was the Chinese wholesale market.

The company won the Queen’s Award for Export. It’s a long-established award. There’s an export award and an innovation award that are given out through the queen and the government. The export award is specifically to encourage, reward and get recognition for companies who significantly exported. There was a very, very small export business when I joined the company, but I was the main driver in expanding it and we ended up selling products to Germany, to Holland, to Denmark. Denmark is quite a large duck consumer, particularly for Christingle which they celebrate at the beginning of December. I remember that one year we were sole supplier of all the ducks to the Faroes Islands.

Manor Farm Ducklings was originally a family-owned business. They had only one other professional manager – the factory manager – when I joined as the first ever finance manager. Basically, as they were expanding, they needed to have proper accounts and also wanted to make a big investment in a brand-new site and of course, banks want proper management accounts. When I joined they were in the process of installing the brand-new computer system. It made a few errors. In fact, they lost all their data because they didn’t have a backup so basically I had to start from scratch and install the financial system for them to be able to produce monthly management accounts. I then got into expanding the export side of the business. After two and a half years, I was made the general manager in charge of everything because by that time we’d recruited some more professional managers, both on the farm side and the sales side, to help the family take the business to the next level.

I was at Manor Farm Ducklings for six years and then I moved on to a company in Norwich – an American company called Fluke Precision Measurement. The company designed and manufactured test and measurement equipment – anything that an electrician uses, which then has to be calibrated. You need a calibrator, which is an expensive piece of electronic machinery, to be able to calibrate your instrument.

The company in Norwich was originally founded in the early 1970s by two guys and was called Datron Instruments so it’s quite an established Norwich business. It’s been at a site on the airport industrial estate since 1978. The two owners sold the business to another company called Wavetek, which was an American company. The only other worldwide competitor to the Norwich company was a company called Fluke, who did the same thing – manufacturing test equipment and calibrators. They were based over in Seattle in the northwest of the US. It was originally founded by a guy called John Fluke after the Second World War. He’d been established in the Seattle area since then and between them, Fluke and Wavetek in Norwich, dominated the calibration market at about 80/85%.

Wavetek decided to sell out the business. Fluke had been taken over also at that time, so what they decided to do was take over the main opposition so together Norwich and Fluke combined ended up with 80 – 85% of that calibration business. The Norwich company was taken over in the year 2000 and is still making calibrators to this day.

I joined in 2001 a year after the buyout by Fluke. The then finance director, who I took over from, was coming up for retirement so I was recruited to replace him when he then retired. After about a year of me being there he retired and I took over as the site lead and now 21 years later I’m in the same situation where I’m now coming up for retirement so they’ll be looking for a replacement of myself.

The company has a big budget. Turnover wise we’re about £80 million. In Norwich we have about 140 people on the site. We actually own the buildings, but the land is owned by Norwich City Council. Effectively it’s adjacent to the Norwich City Airport and originally was part of what was the Airforce base which was established in the Second World War. The other side of the estate, within walking distance, was the old officers’ housing estate and what have you. The site has been there since 1978. We have a lease on the land which will expire in 2106 so, as I say to people, that will be someone else’s problem when that expires.

I’ve worked with a lot of scientific and technical people. One of the big drivers within manufacturing is lean manufacturing and I’m also a lean processing practitioner and so I go to training events across different sites within the wider organisation. I’ve travelled quite extensively. I think I must have been to at least a dozen different countries with Fluke including the Netherlands, where our European headquarters is, Germany, France, Switzerland, Austria, Romania, the Czech Republic and both the east and west coast of the US.

Over my long and varied career the thing I’ve enjoyed the most has been, I think, the interaction with other departments and helping to grow and continue the business basically. The business development side has interested me rather than the pure accounting side.

Retiring and the impact of Covid on business

The things I suppose I’m most looking forward to in retirement are the choice and freedom. I don’t have to get up every day and go to a place of work. Although in the last two years with the Covid pandemic there’s been a significant change in the world of work and a lot of office jobs, from necessity, went to home working. The big debate in business now is what does the future of work look like? Will it be home working for people who can, will it still be based in an office or will it be a combination of both? The likelihood is that it will be more flexible and a combination of both because in a lot of jobs you can’t really get away from that personal interaction you get when you’re all on a site. As I say, it’s the big debate at the moment in terms of what does the future of work look like?

I’d say the last two years of work have been probably – for everybody who has been working or otherwise – a gamechanger with the Covid pandemic. When that first came about of course people who could work from home had to work at home and then essential businesses, where people couldn’t work from home, had to still go to work.

The Fluke Norwich site was considered an essential business because some of the other products we manufactured, particularly temperature monitoring and what have you, were sold to the NHS. In the first year of the pandemic the NHS created a lot of the temporary Nightingale hospitals, and to be rather morbid, each of those Nightingale hospitals would’ve had temporary mortuaries. Those mortuaries have to be temperature controlled and we made and sold the manufacturing equipment to monitor the temperature.

When the lockdown first came about we had half our workforce working from home and half on site. On site we had to do loads of work in terms of making one-way routes, segregating people who worked together by screens, and enforced mask wearing. The mask wearing has only recently been made optional. It was compulsory before then for anybody who was on site to wear masks. And, in fact, it’s only in the last few weeks that some people have come back to the office for the first time in nearly two years. It was a massive change both for those people that had to work from home and the people who were on site. The changes we made on site went down to switching off the hand driers in the toilets and changing to paper towels to try to minimise contamination. We had a cleaner permanently walking round during the day to hand sanitise common door openings and surfaces. In our canteen area we had to split and divide all the tables to just make them single occupancy tables and put wipes on each of the tables so when people first went to a table they would have to wipe it down.

We made a big point of the fact that we were supplying the NHS, especially for people who couldn’t work from home. There was a lot of apprehension among them in the first few months of Covid outbreak in the spring of 2020. A lot of people were fearful of coming into the place of work because for everybody it was the unknown. 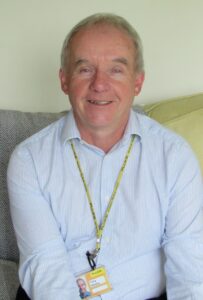