Jean worked in her father’s shop as a girl and remembers the war and the soldiers who came into the shop.

Our lives changed when I was nine years old. Father worked on a P&O liner but the war affected liners’ work in 1939. We left our home in Eastwood in Essex, and it meant I left my friends too. Nobody likes change and because of this my parents bought me a dog, Mopey. We moved to Leigh-on-Sea near Southend, Essex, where mother, my brother and I helped father to build up the newsagents.

The shop was double fronted, like two shops joined together. It was a big shop to work in. There was a big step and two doors. On one side was the stationery and the hairdressers, and the Colosseum cinema was opposite. Coming up the road you’d see the window with sweets in their jars – sweets weren’t wrapped in those days; we had to weigh them out. Mars bars and Milky Way were the most popular ones. A friend at school would have a Mars every day! They cost 6d then.

We lived in a house at the back of the shop which was over a hundred years old. It was pretty awful but we made a home of it. It was our home. It was good until a boyfriend came to give me an invitation. He used the back way and probably thought it looked a bit slummy. My parents must have thought it was letting me down living there, so father bought a house down the road so they didn’t have to live in the shop.

The shop opened from six to six. I would get up 6:30, roughly, to deliver papers. We closed for lunch. I remember one day I left the keys in the door of the shop. Luckily nobody got in. Wednesday was early closing day and we closed at one o’clock. Saturdays were the same as the week really. Even my husband worked Saturday mornings until the latter days of our marriage when he got more time off.

When the shop opened, soldiers or people going to work would come in. We were lucky with the business because soldiers were billeted at Leigh-on-Sea and they brought cigarettes and papers. It was quite fun having them around. They were around for days and then suddenly disappeared. Now I realise they’d gone to fight in the Middle East or wherever.

I worked in the shop before I left school. At 15 I mainly delivered newspapers and if the paper boys didn’t turn up I had extra work! We had to mark them up first with numbers on the papers, put them in a bag, put it on your back and then ride a bicycle. I rode an Elswick, like a Raleigh but heavier then. The bag was heavy and I don’t know how I did it. We delivered magazines too. And in those days people would complain if you didn’t shut their gate; it was a stricter age in many ways.

The Daily Express, News of the World, the People and the Daily Herald were the most popular papers. I don’t remember much about the magazines. I read Girls’ Crystal before reading Good Taste which was a magazine for ladies.

Fortunately when delivering papers I didn’t have any problems with the customers’ dogs. As a matter of fact, Mopey – an Airedale – came with me. I must have been slow because I’d often had a crowd of dogs with me because Mopey was a bitch. She had ten puppies in the end. I don’t think that happened when I was doing the paper round though!

We had harsh winters. I remember thick snow on the ground. It was a hard life but we were young; we didn’t think it was hard. A friend lent me waterboots made of rubber and my feet were frozen in them. I also had thick scarfs, hats and gloves. When she asked for her waterboots back I think I wore ordinary shoes.

We had rationing: coupons which had to be cut out. I remember a broad Scottish man was being served by mother and he asked ‘Are these rationed?’ She thought he’d asked if they were Russian. She called to father in the back office ‘Billy, are these Russian?’ We wouldn’t let her forget it!

Buying clothes was a bit of a problem. I think it was better towards the end of the war. I was a spendthrift then as I didn’t have the money.

I wore skirts and blouses with my hair in an Edwardian style which I liked. I liked long hair and most men, like husband, did too. I cut it off when I got engaged and had ‘stubby’ hair. There was the lovely hairdresser’s over the road; Miss Madson and Miss Wingate which used to smell lovely. I had a perm there, but it didn’t last. I don’t know why I didn’t keep having it done but instead I would curl my hair up every night and through my marriage. My poor husband had to see me with curlers in…

I remember walking into the shop after evacuation and I could smell mice. The sweets were put in a counter with glass over the front and I suspect mice were running over them during the night which is ghastly. I don’t remember any health and safety restrictions; we didn’t wear anything special when working in the shop. I didn’t tell my parents when I smelt the mice. A lot of things weren’t talked about and that was a sad part of the war; it was very unsettling.

We had a fortnight’s holiday when I worked at the shop. Being in Leigh-on-Sea near the seaside we didn’t go away. I do remember going to the beach at Eastbourne when I was little with my grandparents. I think mother’s mother was there too. People are too keen on holidays now, going to these faraway places, hanging about at the airport; it’s a shame.

I got to keep my pay of £2.0s.0d and I was paid this until I got married in 1951. Mother and father would pay when we went to the cinema – two or three times a week. I went there with a boyfriend too.

My husband and I were born in East Ham in London; we’re Cockneys really. We must have passed each other in our prams as we’re the same age. Strange to think we didn’t meet until we were 21 and in Essex. The best thing in my life was when I met my husband. My life began after I got married to Des. I stayed home to look after our daughters; they didn’t go to nursery.

Des was an insurance broker at first and insured a lot of aeroplanes. I didn’t fly until I was 50. We travelled to Montreal, my favourite city in Canada. We flew to New York and about eight towns in eight years. 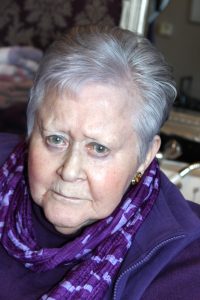 View all posts by WISEArchive →
If it hadn’t been for the War…
Governing Prisons: despair and hope (1965-2015)